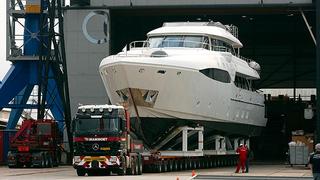 Recently splashed in the water in front of Dutch yard Moonen is Crystal, the 36.93m semi-displacement Dixon 120 which started life at Royal Denship but was only a quarter completed at the time the Danish yard went bankrupt. Moonen was commissioned to finish her, and in October 2009 took delivery of her hull and parts of her superstructure.

Built in GRP from an original design from Bill Dixon, Crystal posed a challenge for Moonen, which usually works with steel or aluminium, and apart from the physical construction work that remained to be done - including the main deck and the stern - there were significant gaps to fill in her engineering packages, which were inconsistent with the available design and construction information. However, relishing the challenge, the yard undertook her completion with a full understanding that the task would be a 'delicate balance between a new build and a refit', and choose to approach it as a traditional custom build rather than deploying its usual modular construction technique. One benefit of this has been the opportunity to trial new production methods and techniques that will now be used by Moonen in future refit projects.

Naval architecture was a combination of Bill Dixon and Stolk Marimecs with the owner undertaking her interior styling based on the design that Royal Denship had drawn in detail. Described as a 'British style' it features dark nut wood with magnolia leather and 4.5 tonnes of marble.

The yacht itself accommodates 10 in a main deck owner's suite - with en suite bathroom in the bow and four lower deck guest cabins - one full beam VIP, one double and two twins. Guest areas include a main deck saloon and dining area, an upper saloon on the bridge deck and a sun deck with spa pool, sun pads and a small bar. Both the bridge and main deck have alfresco dining tables on their aft decks, in addition to seating and sunloungers. The crew of five are accommodated in crew quarters in the bow, with a cress mess, captain's cabin and two crew cabins with bunks.

The stern garage houses a tender and jet skis.

When the yacht is delivered to her owner at the end of August she is expected to head for Antibes on her maiden voyage.