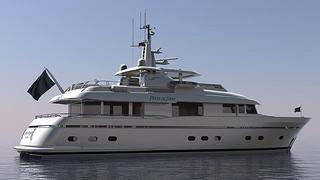 Few yachts of this size are fully customized and built to the highest standards. Under construction for a couple of years now, the 29.26m motor yacht Belle de Jour is soon to be launched at Flevoship.

Belle de Jour was designed by Pieter Beeldsnijder for a repeat client. And significant imput came from her experienced owner, as confirmed by the designer: 'The owner of Belle de Jour has been very involved at every stage of the design and construction, which became increasingly sophisticated as it proceeded. Together we have carefully worked through every aspect in the finest detail and had great fun doing so. This is the best way to get the best possible product, and one of the reasons why Belle de Jour can truly be called a mini-mega yacht.'

On board Belle de Jour, no extra volume was added and she was essentialy designed for comfort. The interior has Art Deco touches. The main deck is an open space, including the galley and a large U-shaped lounge surrounded by windows which open up to create an alfresco area.

Belle de Jour accommodates six guests in a full-beam master and two double cabins which can be combined into a VIP. Belle de Jour was created to be often helmed by the owner himself, and only a limited crew will be on board. Their quarters are aft, independent, and composed of two twin cabins.

Lloyds registered, built in steel and aluminium, she's powered by twin economical 440kW MAN engines giving a top speed of 13 knots. And special features also include a customized flybridge with a hidden area for a small car, two side balconies and enough space for two tenders.

We'll provide you with more pictures at the end of March, when Belle de Jour is launched.