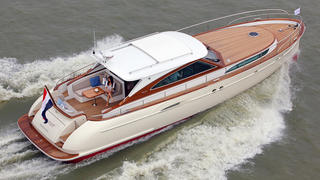 Dutch yard Mulder Yachts has revealed the latest version of its Favorite 1500, which features an improved aft deck layout. Popular among superyacht owners as a day cruiser, the Mulder Favourite 1500 features the yard’s distinctive round-bilge hull, which was developed in collaboration with Guido de Groot Design.

New features on this updated 15.6 metre launch include a larger garage in the transom, which can swallow up a three metre tender. Mulder Yachts has also added new insulation materials and under floor heating for year-round comfort, while the aluminium construction is now 10% lighter than before, for a total displacement of 18 tonnes.

The layout comprises a main deck saloon that is divided from the cockpit by a sliding glass door, while accommodation on the lower deck is split between two en-suite guest cabins.

In a statement, the yard explained: “The renewed Favorite 1500 will have a more elegant, a more genuine look combined with much improved new aft deck layout to ensure the highest levels of luxury and comfort on board at all times.”

Power comes from a pair of Volvo Penta D6 engines for a top speed of 25 knots and the completed launch has been classed as RCD Category A for offshore cruising. The first new Favorite 1500, which has been built as a yard demonstrator and named Summer, will be showcased at several boat shows during the 2016 season.

Upcoming projects currently under development at Mulder Yachts’ Zoeterwoude-Rijndijk facility include the BN 105, a 36 metre superyacht that is due to launch in 2017.