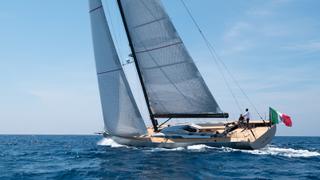 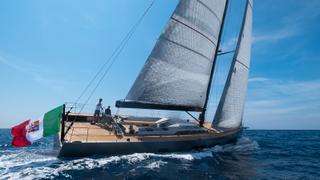 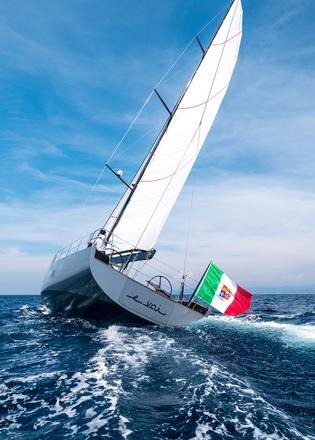 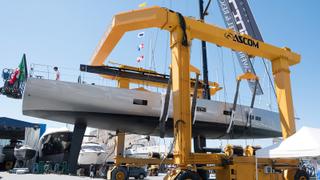 Italian yard Mylius Yachts has announced that the third hull in its flagship Mylius 76 series of sailing yachts was launched in Tuscany earlier this month (June 11) and named E Vai.

Built from a carbon-fibre hull and superstructure to an Alberto Simeone design, this 25.25 metre sloop is a true blue water yacht, achieving the highest CE Category A rating. Her lightweight construction means she displaces just 30 tonnes.

Accommodation is for six guests split between three staterooms, including an owner’s cabin and two convertible twin rooms, all of which are situated in the bow area. Meanwhile, the internal décor was developed by the in-house team.

Her waterline length of 21.5 metres means that she can be entirely owner-operated, however Mylius Yachts has fitted a compact crew quarters back aft, allowing E Vai to house a staff of up to three people when needed.

As her 76FD model name denotes, E Vai is a flush-deck design, which suggests a more sporty purpose, possibly competing in some of the world’s best superyacht regattas. This impression is backed up by the fitment of a single rudder set-up and electric deck winches from Harken.

E Vai's carbon fibre Hall Spars mast can support a total sailplan of 311 square metres and auxiliary power comes from a single 220hp Yanmar 6BY3 diesel engine. Her vital statistics include a 5.85 metre beam and a maximum draught of 4.25 metres.

Following the completion of her sea trials, E Vai will head to the 2017 Cannes Yachting Festival, where she will make her public debut. The Italian yard adds that the fourth and fifth hulls in the Mylius 76 series are already under construction with one sporting the flush deck design and the other a deck saloon.