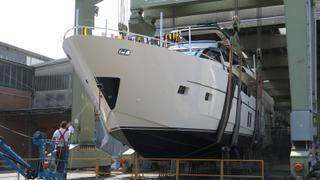 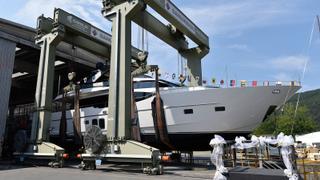 Sanlorenzo has launched the 14th hull in its entry level series, the 24.6 metre Sanlorenzo SL78 which has been named Balance. The yacht, which was sold by Sanlorenzo Spain to a Northern European client earlier this year, is set to be delivered later this month.

Balance's maiden voyage will see her cruise to Mallorca, Spain where she will be permanently based alongside another SL78 set to be delivered later this summer.

The client has previously owned several production yachts, but this will be their first semi-custom project. The specification has been designed around luxurious Mediterranean cruising with room for up to eight guests and two crewmembers.

The guest layout includes an amidships owner’s suite on the lower deck, a VIP cabin, a double and a twin. Key features include a hydraulic launching system that will allow Hull 686’s 3.95 metre jet tender to be splashed with ease. Vital statistics include a 5.74 metre beam and a maximum draught of 1.8 metres – ideal for shallow waters cruising.

Propulsion will come from a pair of 1,622hp MTU 10V2000M96L engines, which is the more powerful of the two set-ups that Sanlorenzo offers, giving an estimated top speed of 29 knots. What’s more, a total fuel capacity of 5,350 litres ensures that extended coastal cruises are on the cards.

First introduced at the 2016 Cannes Yachting Festival, the Sanlorenzo SL78 series has proven to be particularly popular. The Italian yard will be hoping that its new entry-level model the SX72, which is due for a public debut at Cannes this year, will continue this trend.