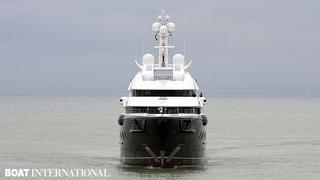 Nirvana makes her debut on the Côte d'Azur

Now delivered, she's the 39th largest yacht in the world.

To recap, Nirvana has naval architecture by Azure Naval Architects and Oceanco’s in-house team, while her exterior lines come from the boards of Australian designer Sam Sorgiovanni. Sam Sorgiovanni is also responsible for the contemporary interior, which will accommodate 12 guests.

Nirvana is powered by twin 3,600kW MTU 20V 4000M73L engines giving a top speed of 20 knots. During her maiden voyage from Netherlands to France, she recorded an average speed of 18 knots.

Despite the inclement weather, Nirvana was welcomed by many people on the 'billionaires pier' of the Yacht Club of Antibes. She was moored not far from another yacht with which she has some features in common - the Oceanco Anastasia...