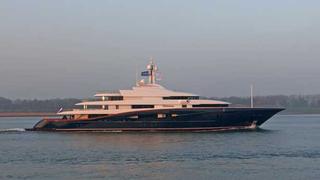 On 7 February we reported the launch of Oceanco's 88.5m motor yacht project Y707, and now we can tell you she's named Nirvana and was spotted leaving the yard this morning for her first sea trials.

Once delivered she will join the list of the world's Top 100 Largest Yachts, where she will slot in between the 90m Laurel L and the 88.15m Asean Lady, which are currently in 38th and 39th places, respectively.

Nirvana has naval architecture by Azure Naval Architects and Oceanco’s in-house team, while her exterior lines come from the boards of Australian designer Sam Sorgiovanni. Lloyd’s registered and MCA compliant, this six-deck superyacht, built in steel and aluminium, is ingeniously designed with interconnected interior and exterior areas thanks to large sliding doors that allow guests to be both inside and outside simultaneously.

Sam Sorgiovanni is also responsible for the contemporary interior, which will accommodate 12 guests. The master suite, complete with office, private deck and spa pool, will enjoy panoramic views from the foredeck. Five further VIP cabins will accommodate the other guests, including a larger one with a lounge and his-and-hers bathrooms.

Nirvana is powered by twin 3,600kW MTU 20V 4000M73L engines giving a top speed of 20 knots. Special features include a 7.5m swimming pool with height adjustable floor on the main aft deck, an helipad on the sundeck, as well as a dedicated indoor 3D cinema.

Delivery of Nirvana is scheduled for April.