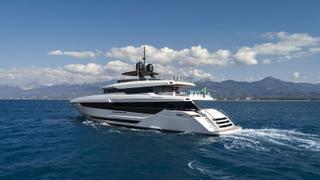 Family-run shipyard Overmarine has delivered the third of their Mangusta Oceano 43 series.

The 43 metre, three decked yacht, which has been designed by Alberto Mancini, is built from steel and aluminium. It has a beam measuring 8.7 metres and a 450GT.

Key features include a forward infinity pool flanked by two separate sunbathing areas which lead into the pool with a waterfall. The yacht also features an aft beach club where a hatch opens up to convert into a swimming platform.

The yacht can accommodate up to 12 guests in five cabins while the crew quarters of four cabins allow for a staff of seven.

Mangusta commercial director Francesco Frediani said, “Behind every sale always stands a winning product and an owner in love. The Mangusta Oceano 43 is truly one of a kind, and the market is rewarding us for that.”

This newly delivered yacht joins Overmarine's Mangusta Oceano and Mangusta GranSport series, coming shortly after the debut of its new flagship, the Mangusta Gransport 54 El Leon at the Monaco Yacht Show last year. The Alberto Mancini-designed yacht became the Italian yard’s flagship upon her delivery in May 2018.