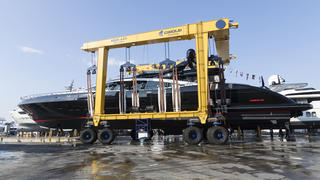 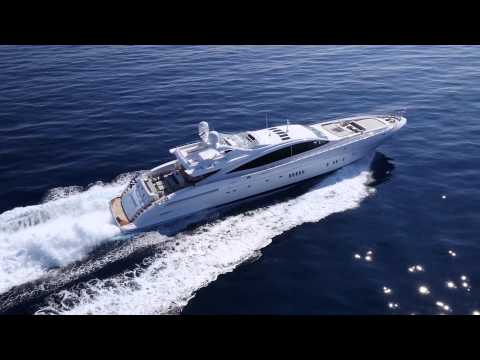 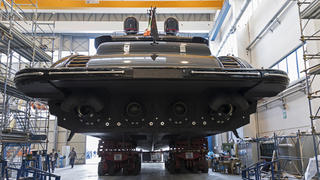 The 12th hull in the popular Mangusta 165 series of maxi open yachts has been launched by Italian yard Overmarine, sporting a black hull finish with bright red detailing.

“Over the past few years we have established ourselves more and more as a leader in our sector; namely that of large, open semi-custom yachts,” said Overmarine Group's commercial director Francesco Frediani. “The Mangusta 165 has undoubtedly contributed to this result, turning the Mangusta brand into an out and out icon.”

Where the latest Mangusta 165 differs from her predecessors, however, is in terms of fuel consumption, which is described as “significantly lower”, and stabilisation, with four Seakeepers installed. This results in comfortable cruising even at low speeds of 8-10 knots. Her vital statistics include a draught of 1.9 metres and a maximum beam of 9.2 metres.

In a statement, the yard added: “Her performance, comfort and, of course, style make this 50 metre unique on the international nautical scene.” This new arrival continues the Mangusta performance tradition with four 2,600hp MTU 16V2000 M94 engines twinned to Rolls Royce Kamewa waterjets for a sporty top speed of 35 knots.

Most eye catching is the red detailing on the hull, with a custom skull logo that was designed by the yard working in collaboration with the owner. Local reports suggest that she is the successor to the 29.8 metre Sunseeker yacht Black Legend, but Overmarine declined to comment on this.

Other projects currently under development at the Italian yard include the first Mangusta Gransport 54, which is due to launch next year.