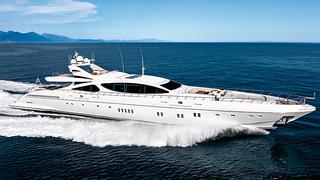 Good news for the industry in general, and Overmarine in particular, as the yard sells three new Mangusta motor yachts.

Most notably, the eighth hull in the 50m flagship Mangusta 165 series is now on order. Able to reach a speed of 40 knots, she's the fastest composite maxi open yacht ever to be built.

Also sold are the first two hulls in the new 28.6m Mangusta 94 series, an evolution of the popular Mangusta 92 sports yachts. New features include a sundeck and primary importance has been placed on natural light, with four ceiling skylights in the saloon and large windows in the master suite.