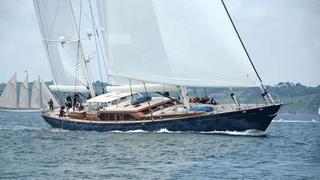 Although Falmouth Bay provided less sunshine, there was more breeze – a steady north-westerly force four – for the second race in the Pendennis Cup on Wednesday.

Race Officer Peter Craig set a predominantly reaching course for both classes, 26 miles for the Pendennis Division and a little shorter for the smaller boats. ‘We wanted to give them a longer one today as we think it’s going to be much lighter on Friday and Saturday,’ says Craig.

Boats in the Pendennis Division have staggered starts, at three minute intervals, but it wasn’t long before 46m Christopher, starting second to last, was in front. ‘We took the lead at the end of the third leg, a tight reach on which we managed to carry our asymmetric spinnaker, and we were hauling everyone in at 13 knots,’ says her captain Marko James. ‘From then on we had completely clear air’. Christopher eventually crossed the line in first place but then had an anxious wait for the corrected time results. ‘We knew we’d saved our time on Breakaway,’ says James, ‘but the others were too far back to know’.

Eventually it was announced that 26m Velacarina, finishing over half an hour after Christopher, had exactly the same corrected time, and these two ketches were tied in first place –the first time this has happened in races governed by the International Super Yacht Rule in which each boat is allocated a different handicap number before each race, according to the day’s conditions and course.

In the Little Dennis Division, 13.1m Firebrand won line honours again, but this time she failed to save her time on 13.1m Cerinthe, which was first on handicap. The ketches 16.6m Cuilaun and 14.5m Zarik were third and fourth.

Thursday is a lay day but both classes are delicately poised at the halfway stage. In the Pendennis Division, Velacarina has 3.5 points, and both Christopher and the 21.3m Breakaway have 4.5; while in the Little Dennis Division, Firebrand and Cerinthe are tied on three points.