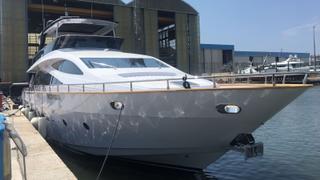 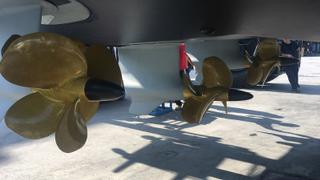 Italian yard Permare has announced that the third hull in its Amer 94 series was launched in Viareggio earlier this month. This 28.65 metre all-GRP fast-planing yacht features naval architecture developed by Massimo Verme, while the interior design comes courtesy of Stefano Tini.

Accommodation is for eight guests in four cabins. These include a main-deck owner’s cabin, which stretches across the entire 6.3 metre beam, a lower-deck VIP and two further guest cabins. Meanwhile, the crew quarters allow for a staff of up to three people.

Although this layout is the same as hull number one, Baccarat, the Italian yard is keen to point out that five-cabin and three-cabin versions are also available.

Another similarity to the first Amer 94 can be found in the engine room, where the owner has chosen the triple 900hp Volvo Penta IPS 1200 set-up. This translates into a sporty top speed of 29 knots and a maximum cruising range of 750 nautical miles at 19 knots — figures that were confirmed by the yacht's recent sea trials.

Other key features include a plethora of exterior relaxation options, such as the superyacht sundeck with its retractable Bimini, and the foredeck seating area, which provides additional privacy when moored stern-to.

Permare has also paid particular attention to noise insulation on board all of its Amer 94 yachts, with just 52.9 DbA recorded in the master cabin when cruising at 10 knots.

Other superyacht projects currently under development at the Italian yard include the first hull in the semi-displacement Amer 110 series, which is also due to hit the water this summer.