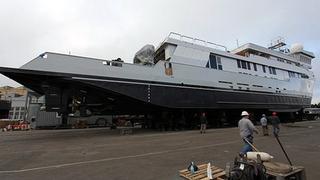 The fully refitted motor yacht SuRi was launched last week and has begun a voyage to Antarctica and across the South Pacific, available for charter with 37 South.

After four and half months in the yard at Bay Ship & Yacht Co. in San Francisco SuRi now has 11 metres added to her mid-body.

The sun deck has an extended al fresco dining area as well as an expanse of outdoor sunning, lounging and shade areas. The bridge and helicopter deck has benefited from the new length of 63.4m which has allowed for a much larger elegant lounge area. An extended guest lounge has also been added to the existing lounge which can either be closed off in glass and fully climate controlled to be part of the formal lounge or opened right up for the indoor outdoor affect on those balmy south Pacific nights.

Two full beam guest cabins have been installed on the mezzanine level in addition to the two existing cabins which have also been expanded. Each of these four guests suites features an unobstructed private view. SuRi can now accommodate not only 12 guests but six guests’ staff in the guest cabins, along with 14 crew.