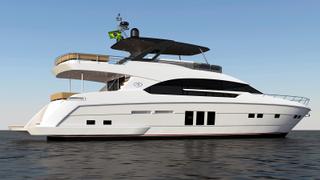 Riostar 83 yacht under construction in Brazil

This flybridge motor yacht features a beam of 5.8 metres and should weigh in with a total displacement of around 55 tonnes, he told Boat International.

Sold and currently under construction, the new yacht is due to make its public debut in April at the 2018 Rio Boat Show, according to local publication Revista Nautica.

Almeida adds that the deck and hull are complete and the engines have been installed. The next stage will be to infuse the superstructure and flybridge.

Key features include a large bathing platform, which should provide easy access to the water, while a pair of transom staircases lead up to the sheltered cockpit.

Moving inside, the Riostar 83 will feature a main saloon that measures 60 metres square with a lounge area, television and formal dining space for hosting up to eight guests.

However, the star of the show is surely the flybridge, which measures 45 metres square, with a large C-shaped wrap of seating back aft, two sunpads and an al fresco dining area that is sheltered by a hardtop Bimini. What’s more, the on-board bar includes a barbecue grill, sink, icemaker and refrigerator.

Power will come from a pair of 1,925hp Caterpillar C32 engines that will propel the Riostar 83 to a cruising speed of 32 knots, topping out at 37 knots, while a total fuel capacity of 5,000 litres should allow for extended coastal cruises.

Other superyacht projects currently under development at the Brazilian yard include the 45.3 metre Riostar 160. Due to launch in 2019, it will be the yard’s fifth superyacht and the largest built in Brazil to date.