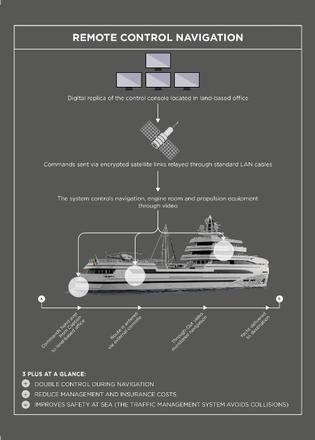 Drawing on ‘self-drive’ technology currently being trialled in cars, the Italian yard has said it is working to adapt remote control technology for use in yachting.

The creation of such autonomous vessels could result in long deliveries being conducted by a land-based senior office using remote-control technology, it said.

The system envisaged by Rosetti would see the navigation, engine room and propulsion equipment controlled through a video system and night vision cameras.

This would enhance security during navigation and reduce management and insurance costs, the shipyard claimed.

The yard said much of the technology needed for autonomous vessels is already in place and pointed to the Giano Tug which is controlled via a remote control system based on a machine to machine connection installed aboard.

The Lloyds Register certified tugboat was presented at the ITS Tugnology convention earlier this year and was controlled by a captain using a remote console.

The yard called on the International Maritime Organisation to update regulation to enable remote control technology to be transferred to yachting.

It pointed to the Lloyd's Register which it said has already published classification for six autonomy levels.

"Maritime law is one of the oldest legal systems in the world that has successfully adapted from sail to steam and beyond. No doubt the same will hold true for autonomous remote controlled vessels in the near future," the yard said.