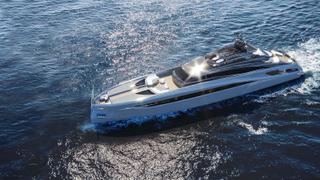 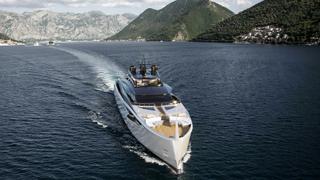 The new line has been designed inside and out by Fulvio de Simoni and includes a range of sizes.

Wide outdoor areas and a fast displacement hull are signature features of the new line.

Speaking about the design, de Simoni said: “I wanted to a boat with extraordinary, sporty and unique design but with the same volume that is available on a more traditional yacht.”

"It is the first yacht of this size to have an extra covered deck. Usually an extra deck makes the yacht look heavier, but I think this is a very sporty yacht and yet it has to master cabins."

Based on a fast aluminium hull designed by Arrabito Naval Architects, with top speed of around 20 knots, all Infinity models will feature a shallow draft ranging between 2 metres and 2.75 metres.

This will make them well suited for entering the Bahamas, the Caribbean or Mediterranean harbours, the yard said.

Rossinavi also revealed that the 42 metre model is specifically aimed at the US market, with a draft of just two metres.

Rossinavi chief operating officer Federico Rossi revealed: “Key areas are the big garage and impressive master suite that gives the client entering the cabin the feeling that [they] are on a 50 metre rather than 42 metre.”

A structural balcony with a sliding door that does not require crew operation is another key feature.

The 42 metre has a number of layout options and will accommodate up to seven crew.

The shipyard is developing a full engineering package, which should allow it to deliver the 42 metre and 50 metre within 17 months and 22 months respectively from the point of order.

Camper & Nicholsons is the exclusive representative for the Infinity line in the Americas.