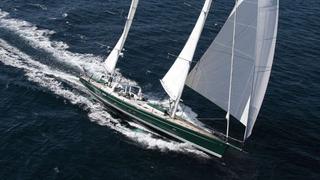 Baltic Yachts revealed today that it had completed a nine-month refit on one of the most famous Wallys ever built, the Luca Brenta-designed 105 Nariida, originally known as Wallygator II.

The yacht left Baltic's facility in Jakobstad, Finland, on June 11th, becoming the first yacht refitted by the company that it did not build itself.

The 32m Nariida was built in 1994 and was way ahead of her time, featuring new materials and technologies including carbon fibre, titanium, honeycomb interior joinery and electronics controlling every function on board.

The yacht was used extensively for 20 years for both cruising and racing, which took an inevitable toll. 'Renewal of surfaces has... been an important part of this refit project,' Baltic said. 'This involved not only rig and hull paint and a new teak deck, but also a major replacement of teak veneer in the interior.'

The interior layout was also changed, particularly the galley, navigation area and owner's cabin. On the technical side, Baltic installed a new generator and upgraded and added batteries. New water heaters and cooling machinery was also fitted, combining with the new fridges and freezers throughout.

Baltic said one of the main goals was to dramatically increase the amount of time the yacht could go completely quiet, when in full cruising mode the generators can be switched off.

The Finnish company said: 'Nariida is our first completed refit project on a yacht we did not build ourselves. It has therefore been an important success factor to have the crew present at the yard, as well as frequent visits by the owner.

'It’s been very much an "all hands on deck" attitude, which has turned out great results. We are very grateful to have been part of this, and wish the ‘new’ Nariida fair winds and happy sailing through many years to come.'