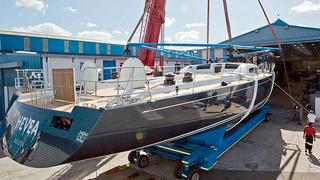 The second hull from Southern Wind’s new 102 DS series was launched in Cape Town a few days ago. This 31.42m sailing yacht has been christened Hevea.

A successor to the popular SW 100 DS series, the SW 102 DS is a composite sailing yacht with naval architecture by Farr Yacht Design and general design, exterior and interior styling by Nauta Design. The first hull, called Almagores II, was launched in May 2012. She's one of the finalists in the World Superyacht Awards 2013.

Compared to her sister, Hevea has a standard layout with the owner suite forward, and the crew area aft. Her sophisticated interior accommodates eight guests in four cabins: a master suite, a VIP, and two twins.

Hevea will be delivered for the upcoming season. She will be also presented at the Monaco Yacht Show in September.

Southern Wind also announces the construction of a third hull of this series, but this time in the Streamline version (SW 103). And their next launching will be the first SW 82 sailing yacht in May.