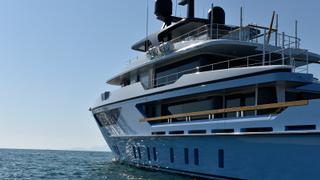 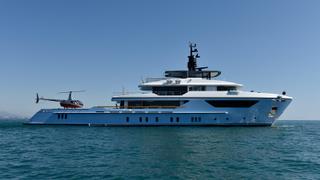 Italian yard Sanlorenzo has announced that a further three models of its 500 EXP range are currently under construction.

The three boats are all being built at the yard’s La Spezia facility and include an Ice Class model for a Dutch owner.

It comes after the yard launched its first 500 EXP model, Ocean Dreamwalker III, earlier this year to mark the company’s 60th anniversary. Built in steel, the 47.2 metre explorer sports a light blue colour and takes advantage of the model’s extended stern area to accommodate a helipad.

Two guests aboard the yacht, which is due to attend this month’s Monaco Yacht Show, were recently filmed making a smooth landing aboard the landing pad.

The model is an evolution on the 460 EXP with exterior styling by Francesco Paszkowski, and features custom touches to accommodate the client’s wishes.

Called the 500EXP in reference to her gross tonnage of 500GT, the explorer is able to carry tenders, boats and sail boats measuring up to nine metres in length, or even a seaplane or submarine. Its extended stern platform can be customised to include a helicopter landing pad, as demonstrated aboard Ocean Dreamwalker III.

The explorer features a lower deck beach-club with a bar which converts into a terrace overlooking the sea via a foldout door. A compartment on the main deck also houses a five-tonne crane, which can be used to move toys and tenders sitting on the stern.