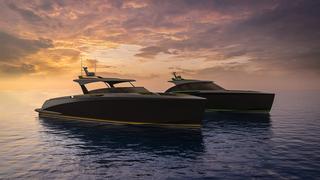 Setzer has shared details of the new Global Oceans D-44 Express tender series ahead of its unveiling at the Fort Lauderdale International Boat Show this week.

An experienced owner and captain commissioned Setzer to design a series of tenders ranging between 12.19 and 16.76 metres. The boats will be promoted as standalone luxury dayboats, as well as superyacht tenders.

Setzer has two model versions in development, the Atlantic and the Pacific. Each has the same hull platform, but there are notable differences. The Atlantic has a low windshield and is intended for open air, warm-climate boating to be found in southern Florida and the Mediterranean. The Pacific is equipped for cooler weather and, as such, has an enclosed helm.

Among the standout features on both models are a below deck heads and day berth, and midship guest berth. There is a foredeck lounging area on both models that converts to a full sunpad.

The form of propulsion is still under development but Setzer has said that pods are the most likely. The moulded length is 13.56 metres with a LOA of 14.32 metres The first hull is expected to be built next year.

Setzer believe the Atlantic and Pacific tenders will continue the firm's heritage of developing and realising unique and distinctive yachts. The boats will be presented later this week at Fort Lauderdale between November 5-9.