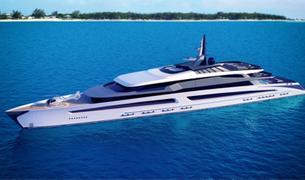 With exterior design and naval architecture by SFG, Project Disco features a steel hull and aluminium superstructure design. Key features include an owner’s suite with a private deck located on the main deck, which takes advantage of the yacht’s full 18 metre beam.

Accommodation is for a total of 18 guests in a further six VIP cabins and two guest cabins, while the design also allows for a staff of 40 crew.

Tender and toy storage is a key priority of the concept, which features a foredeck helipad with a hangar beneath and a garage large enough to house two nine metre tenders and other toys.

Other features include a main deck beach club with a glass transom and a seven metre infinity pool. Project Disco would also come equipped with a gym, cinema, study and lounge which converts into a nightclub.

More details about the concept will be released soon, SFG Yacht Design said.