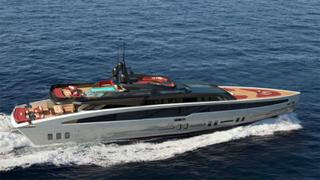 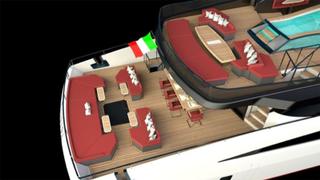 The concept is the first model to come from the Dubai based studio which was founded by Franco Gianna, of SFG Yacht Design, and naval architect Josh Rodriguez.

The duo said the yacht has been designed “with pure comfort and luxury in mind” and features large open spaces and multiple seating areas.

The yacht has been designed and engineered by the pair who said the model would be best suited as a family or charter yacht.

The sporty design features a full-displacement hull and flush deck with a sunbathing area forward. There are multiple alfresco entertainment areas, including a dining area for up to 12 guests in the cockpit. A swimming pool meanwhile will be located centrally on the flybridge.

The yacht will feature a main deck master with a foldout balcony, four lower guest cabins and a large crew area.

The lower deck aft will feature a large comfortable beach club that will open via a large glass transom door and two side opening balcony doors. Forward of the beach club, there will be dedicated tender garage that can accommodate a 6.5 metre tender.

Project Bandida will have a top speed of 18 knots, cruising speed of 16 knots and operational range of 5,000nm. It will be powered by two Caterpillar diesel engines of C32 Acert-series.

The yacht will be able to accommodate 12 guests in five cabins, as well as a crew of eight people. Owners will also have the choice to opt for either a dark or light grey hull colour.