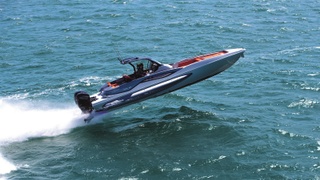 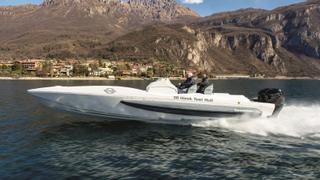 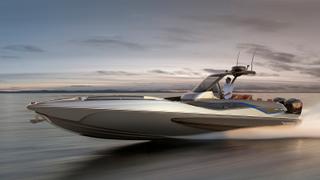 British yard Sunseeker has revealed that it will release a limited edition series of its new performance day boat the Hawk 38 dedicated to founder Robert Braithwaite.

The first 10 hulls of the new model will carry a plaque dedicated to the yard's founder, who died in March. The Hawk 38 was the last project Braithwaite was involved with as Sunseeker founder.

Speaking about the limited edition series, Sunseeker chief executive Andrea Frabetti said: "The legacy of the Sunseeker brand is built on developing performance boats such as the Hawk 38 – it’s in our DNA and something Robert was extremely passionate about having raced extensively in his early career."

The news comes after the yard revealed that the first prototype of the day boat reached a top speed of 68.7 knots on the waters of Lake Como. The official top speed of the model, which took 24 . months to develop and 12 weeks to build, is 62 knots.

The boat was designed in collaboration with Fabio Buzzi Design and reached the sea trial top speed with Buzzi himself at the helm.

The Hawk 38 is available in a number of paint finishes and upholstery meaning that no two boats are ever likely to be the same, Sunseeker said.

Key on deck features include a foredeck fitted with a sunbathing pad and optional foredeck sail canopy, aft facing U-shaped seating arranged around a central table and a centrally located helm station.

Inside, the boat features a toilet beneath the helm, while there is space for two drawer fridges beneath the triple bench stern seats. The yacht will also feature aft facing swim speakers and stainless-steel grills.