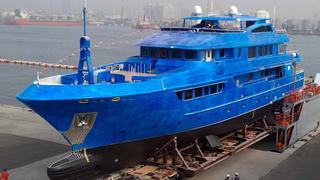 Horizon Yachts reported strong activity at the end of 2011, and it is continuing at the same level in 2012 with the launch of its flagship, the 45 metre EP148, one week ago.

With this new large project, Horizon will be launching one of the largest yachts ever built in Asia. The EP148 is also a yacht of many firsts, as she's the first steel yacht built by the Asian yard, and this steel hull is reinforced to be ice classed by Bureau Veritas. The EP148 is designed by JC Espinosa with the yard's in-house team, and in collaboration with the Russian naval architecture company MTD.

The interior is designed by Birgit Schnaase, accommodating 10 guests in a full-beam master on the main deck, and two double and two twins on the lower deck.

On the technical side, the EP148 is powered by twin 1,760hp MTU engines allowing a maximum range of 4,200 nautical miles at the economical speed of 9.5 knots.

The EP148 will now start her sea trials ready for an April delivery, when her blue protection film will be removed to reveal her white paint job. Her official debut is scheduled for June at Horizon's annual open house.