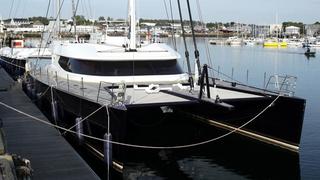 The French yard JFA reports the completion of an extensive refit on the maxi catamaran Mashua Bluu.

Originally built by Yacht Industries, Mashua Bluu wasn't entirely completed before the yard went bankrupt. The 29.4m aluminum catamaran was shipped to JFA in 2010 at the request of the owner, to be completed in accordance with his original wishes.

All systems were upgraded (air conditioning, plumbing, electricity, etc) and the interior and exterior fitting out was improved including a fresh paint job, the chandlery was changed, the rig was optimized, audio, video and electronics were modified or installed, plans and documentation were created, engines and generators were maintained, and sea trials under sail and power were carried out.

Mashua Bluu is now ready to start her second life and her first charter season in the Caribbean.