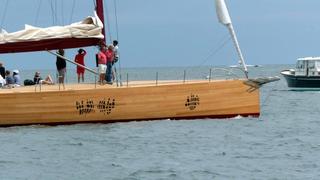 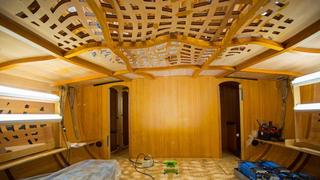 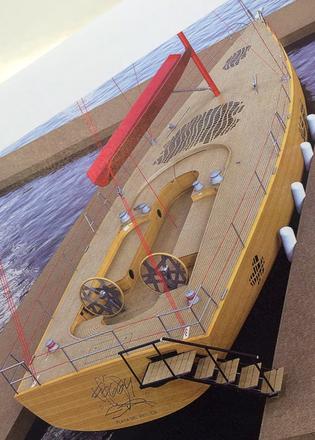 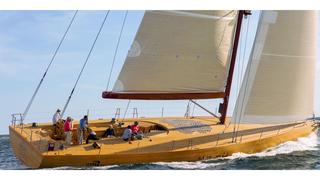 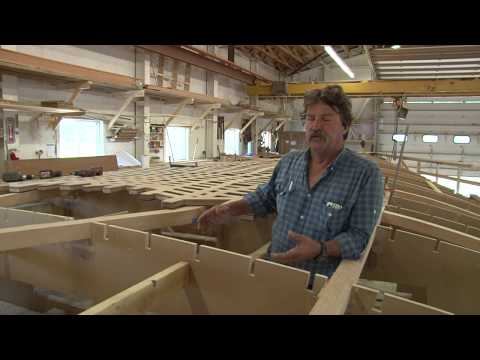 Frank Gehry has designed his first ever yacht, a racing ready sailing yacht named Foggy. Of course architect Frank Gehry, renowned for creating some of the most unique buildings in the world, would have an equally unique yacht. Combining cold-moulded construction, carbon fibre technology, lots of titanium details and hundreds of individual pieces of glass inserts, Foggy is anything but boring.

Frank Gehry’s yacht Foggy launched this summer from Brooklin Boatyard in the US, and she has been turning heads since she started sailing in regattas this summer.

Known simply as Frers 74 during her build, code named for the yacht’s naval architect German Frers, her name Foggy comes from a play on the acronym of the designer’s name Frank Owen Gehry.

The famed architect and his developer friend Richard Cohen decided to embark upon yacht building together, and German Frers was hired as naval architect, often keeping Gehry in check from going too overboard in his first yacht design.

One thing Gehry did insist upon was using copious amounts of glass, in an unusual latticework design.

Brooklin Boatyard President Steve White talks about the glass detailing in the video below, shot during Foggy's build, “This piece here represents the largest skylight in the boat, there’s a little over 300 pieces of glass that will be installed in each of these cut-outs, and the surface of the glass will be flush with the surface of the teak deck.”

And that’s just in one piece. There are more than 800 glass pieces in the top of the deck. Carbon fibre panels support the glass blocks, which shine on the water, bringing Foggy to life in a way unlike any other yacht she will meet.

“Something like this is really pushing the envelope for us in that it’s a real meld of carbon fibre, laminated wood, cored composite structures – it’s what Steve has been known for, pushing that cold-moulded, wood composite one-off envelope and this is a challenging a project as we’ve ever been involved in,” said Eric Blake, project manager at Brookline Boatyard.

Steve added, “Incorporating the ideas that the designer had has taken the craftsmanship up another level from where we’ve always been – this is challenging us in new and different ways. At first, we were going, ‘this is crazy why would you do that?’ And that soon turned to ‘wow, this is so cool, look at what we’re doing!’”

Foggy stole the show at Round the Island Race in Martha’s Vineyard this summer, and next up Gehry and Cohen have plans to take Foggy to Miami, Cuba and Panama – where the Gehry-designed Museo de la Biodiversidad has recently been completed.