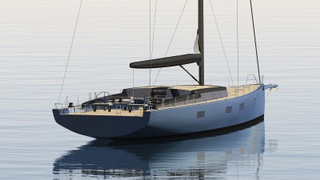 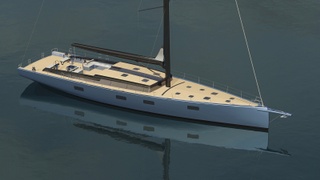 German builder YYachts has teamed up with Tripp Design and Winch Design on an in-build 27.4 metre carbon sloop sailing superyacht.

Currently in build at the Greifswald based shipyard and due for completion in November 2020, the Tripp 90 has been commissioned by an American client.

Performance and comfort have been prioritised in the design, with the owner intending to use the yacht for both regatta racing and global cruising.

Weight saving has also been a priority, with the hull, inner structure and rig of all made of carbon.

Key figures include a beam of 6.8 metres and sail area of 408 square metres. The sail plan has been kept as user friendly as possible, with all halyards and sheets operated from the steering columns. This means that the yacht can be sailed with minimal crew.

Speaking about the project, YYachts managing director Dirk Zademack said: “With Bill Tripp we are collaborating with one of the best naval architects in the world.”

Elsewhere, the owner gave special customisation requests for the deckhouse design, outlining a wish to be able to sit in the saloon and look out to sea. Tripp’s resulting design sees the deck saloon surrounded with glass, allowing the owner to both look out and benefit from the resulting natural light.

The Tripp 90 marks the third collaboration between Tripp Design and Winch Design after the pair previously worked together on the design of the 26.8 metre Shaman in 1998 and the 39.78 metre Alithia in 2002.

The interior has been described as “minimalistic” with an open layout and plentiful natural light. The décor has been inspired by the “east coast of the US and Scandinavia” with materials including soft leather and light oak wood for a “restrained elegance”.