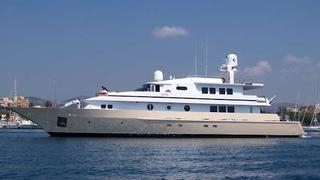 News just in from Lucas de Vilmorin at Yachting Partners International to say that he has taken over the central listing for the superyacht AMZ.

A DNV-classed 42m tri-deck motor yacht delivered by Marinteknik Verkstad in Sweden in 1992, she features an aluminium hull and superstructure, and she has benefitted from several extensive refits over the course of her life, the most recent being in 2009.

Powered by twin 1,240hp MTU engines with water-jet propulsion, megayacht AMZ has a range of 2,200 nautical miles at 13 knots and can reach speeds of up to 20 knots.

She is lying in Athens, Greece, and asking €3.4 million.