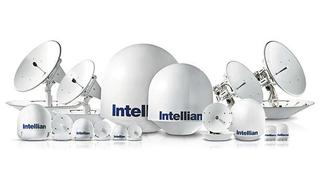 Today’s yachts are totally wired for communication so owners, charterers and crew can conduct business anywhere, at all times. While owners almost expect to earmark budgets for communication devices that will likely be replaced in short order, no one seems to have earmarked a budget to tame those aesthetically intrusive domes.

It isn’t the manufacturers’ faults, as they have streamlined the equipment as much as possible. Blame the parabolic dish – 20th century technology in a 21st century world. Perhaps that is about to change as we sit at the cusp of yet another milestone in technology with the launch in 2013 of the first Inmarsat-5 satellite.

Communications domes seem to both proliferate and increase in size every year. As the size of the dome and the number of receivers required is directly related to the travel radius of the yacht, rising interest in voyaging to remote locations in expedition vessels with cruising ranges that span the globe has driven the issue to the breaking point. The lack of a single global satellite system also fuels the fire: to cruise from northern England to the Aegean requires more than one system as does the common trek from Mediterranean to Caribbean.

The largest domes are employed for satellite TV and internet connections, and while the domes for the internet have reduced in size in recent years, most pundits just don’t see TV domes shrinking in size like calculators and cell phones did. But there are alternatives to explore if the desire and budget exist. SeaTel, for example, has debuted a 24-inch Ku-band receiver that works at higher latitudes. This alone may allow some cruisers in North America to shrink their dish.

The world’s most sophisticated mobile communications centre is undoubtedly the US president’s Boeing 747, yet it isn’t festooned with Mickey Mouse ears or other obvious arrays, nor are the TV receiver domes on a rock band’s tour bus likely to scrape the nearest overpass. But the smaller footprint for communications domes in the leisure marine market hasn’t trickled down to yachts. I once had an engineer from Selex tell me he could duplicate the flat receivers in Air Force One, but it would cost a $1million. That seemed like a big figure at the time.

‘The marine industry has always lagged behind aviation and automotive, about three to five years,’ says Brian Coffin of Aquatic Navigation. ‘The pecking order is aviation, auto, marine. Militarized products and advancements from the battlefield filter to the private market later [after R&D costs are recouped through exclusive contracts]. That’s how technology comes to the marine market. If you look at new military ships, they’re into stealth; their technology is already hidden in the panels,’ he says.

Cars travel primarily in two dimensions and don’t require a rotating antenna to point to the sky, since a flat dish on the roof can gather all the signal they need. Since they don’t pitch and roll like boats, even those automotive in-motion antennas are smaller than a hat box.