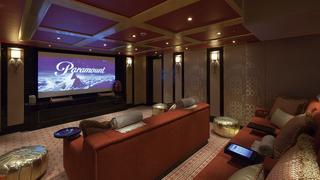 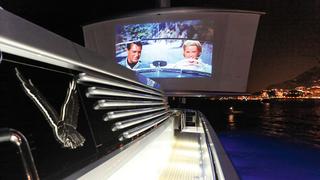 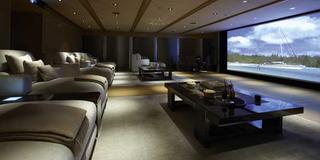 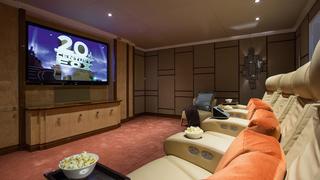 How to keep your onboard cinema up to date

Superyachts such as Solandge and Maltese Falcon have stunning onboard cinemas but, says Henry Farrar-Hockley, designers should beware: such technology is already steaming even further ahead.

The desire and capability to augment superyachts with Hollywood-grade cinemas has never been greater. Over the past few years cinema rooms onboard superyachts have graduated from novelty to necessity, not just for private owners who view their yachts as an extension of their homes – with all the creature comforts that go with them – but a charter clientele who want the best of everything at their fingertips.

In this new technological era, the challenge for superyacht owners is how to maintain their cutting-edge credentials. For while the trailblazing progress of technology is a perpetual draw for newspaper column inches, at the very high-end of the market the latest luxury benchmark devices often slip under the mainstream media radar. Last year, for example, a limited edition “television”, modestly dubbed Zeus, was launched by nascent British manufacturer Titan with the minutest of fanfare, despite breaking the record for the world’s largest indoor screen. With a diagonal span of 9.4 metres and an unfeasibly lifelike, 281 trillion-colour resolution, it represents the pinnacle of non-commercial cinema screens.

At five metres high, Zeus is too big to be accommodated by all but the most colossal of yachts. It nonetheless exemplifies what can currently be achieved at the bleeding edge of audio-visual tech, and where better to showcase such groundbreaking entertainment than at sea?

Take the Lürssen-built Solandge, the 85 metre charter yacht launched in 2013, which boasts not one but two cinemas. Travis Ludbrook, Solandge’s senior chief engineer since its pre-build phase, says: “The owner pretty much knew what he wanted, having had the opportunity to deal with some problems on his other 60 metre Lürssen.

“We wanted to make it bigger and better for him. A bigger boat, bigger expectations, and with a different clientele in mind for chartering between a 60 and an 85 metre luxury yacht.”

The results are eye-opening: up top, an outdoor cinema doubles as a Glastonbury-standard PA system (the owner’s family being more than a little partial to open-air karaoke) with a singing platform extending out over the spa pool, while a drop-down, four metre screen is lit up by a 4K-ready projector from Italian manufacturer SIM2, a veritable Ferrari of its field. “Downstairs is the main event, though,” Ludbrook enthuses. “It’s a room of four metres by seven metres, and the guests get to enjoy motorised, multiplex-style seats that fully recline – while a sofa at the back of the room seats six people.”

The projector, another 4K-compatible SIM2 behemoth, fills a 115-inch canvas with a glorious 3D picture, while the immersive 7.1 surround-sound speaker system is engineered by British marque Bowers & Wilkins. As well as a Kaleidescape film server, two dedicated Apple TV boxes – one for the owners and a second for guests – stream video direct to the giant screen from an iPhone. Naturally, popcorn is provided as standard.

The elephant in any onboard screening room is obsolescence. With yacht builds taking years to complete, and innovation cycles often lasting only a few months, how do you go about future-proofing your ocean-bound cinema at the initial planning stage? Involving the key specialists and consultants early on in the project, for one – although this is now the rule rather than the exception.

“The key is flexibility and an open architecture system,” advises Ken Freivokh, whose eponymous design consultancy provided the inspiration behind the 88 metre Maltese Falcon’s multifaceted AV system, including a breathtaking outdoor cinema in which the projector beams directly on to the lower mizzen sail. Along with installation guru Geoff Lewis of Audio Vision, he is considered to have actually improved the yacht’s cinematic clout since its 2006 launch.

“In the case of the Maltese Falcon, the owner was very partial to Bang & Olufsen,” Freivokh explains, “and one of the advantages with B&O is that they tend to make definite advances and then launch products that remain available in the marketplace for a number of years. Working alongside Geoff, we ended up with a totally integrated solution that has remained very current.”

Another essential, if rather obvious, rule of thumb is to invest in the most up-to-date video systems possible, even if this means seeking out ones that don’t yet exist. Laser light source projectors and fully fledged 4K projector chips are likely to be the next big thing in consumer cinema, although Freivokh is working with Alan Bernardi of Yacht Intelligence on implementing the first onboard installation of IMAX – the super-sized 70mm video format favoured by Hollywood directors such as JJ Abrams and Christopher Nolan. Their ambitious concept, codenamed The Nemo Room, has been optimised to fit into the hull of a 150 metre yacht, with the overall design to be ready for tender by the end of 2015.

The same applies to sound, even if innovations in audio tend to have a much longer shelf-life than video. “We did an install recently which was the first private commercial Dolby Atmos system,” recounts Rex Barrett, senior project manager at Ideaworks. “The client’s brief was simple: I want the best I can get.” Dolby Atmos adds ceiling-mounted speakers to the conventional surround-sound set-up to create a more three-dimensional effect. In commercial cinemas this nascent format requires up to 64 carefully positioned speakers, whereas in a yacht’s entertainment room the same wraparound effect can be achieved with 18 speakers.

“Superyacht designers certainly seem to be waking up to the fact that AV kit needs space and ventilation,” says James Jackson, of Sensory International, a member of the Custom Electronic Design & Installation Association (CEDIA). Logic dictates the most available space for a dedicated cinema can be found lower down in the hull, where windowless areas also ensure that ambient light is kept to a minimum. The downside of this is that designers will need to factor in additional sound-proofing to accommodate your personal screening room’s proximity to the engine, crew quarters and tender garage.

The ideal configuration is to separate your personal theatre into two spaces. “We’re now moving towards screening rooms that just contain a screen and speakers,” says Barrett. “All the other hardware is stored in racks in a separate room, which makes it easier to swap out individual boxes as and when they’re surplus to requirements.”

Yet arguably the most important consideration of all in safeguarding your big-screen investment from becoming out-of-date is the one thing you’ll probably never see: the cabling. “For some years now we have been installing ‘future-proof’ backbone cabling that enables us to upgrade a yacht with minimum changes,” says Ameet Sarvaiya, CTO of Van Berge Henegouwen, the Dutch tech gurus responsible for the cinema systems on board Heesen’s 50 metre Crazy Me. “We always over-cable by around 20 per cent,” adds Audio Vision’s Geoff Lewis, “as this allows a certain amount of failsafe for future expansion.”

Having a tech-savvy crew member – or three – will certainly help prolong the efficacy of your onboard systems, although AV consultancies increasingly offer comprehensive after-sales back-up with a thoroughly 21st century twist. “We provide a full support facility with 24-hour response,” explains Neil Grant, MD of Harris Grant, the veteran marine AV consultancy whose purpose-built cinema and recording studio for Paul Allen’s 60.6 metre Méduse were the first of their kind on a Feadship. “We can also remotely log on to a large number of the onboard systems ourselves to check if they’re running properly. If you can get an internet connection, we can access the boat. It’s a great deal easier than receiving a phone call from a client saying: ‘We’ve just reached the Galápagos Islands and the TV doesn’t work. Can you put somebody on a plane?’”