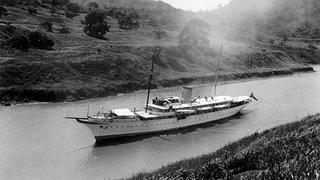 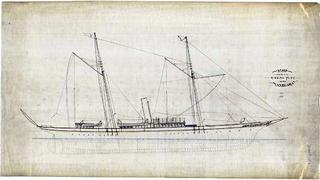 Of the firm’s more current projects, the most eagerly awaited was the re-commissioning of Nahlin, the 91.4m steam yacht that Collier rescued from Romania 13 years ago. Of this the only evidence is a framed photograph presented to the firm by_ Nahlin_’s first owner, Lady Yule, noting her appreciation for ‘the most beautiful and seaworthy yacht in the world’.

After a stop-go period, the major works were completed with Watson exercising a typically multifaceted role. It is the exterior designer, interior designer for crew and service areas as well as being the owner’s representative at the Blohm + Voss yard where the project was undertaken.

If further details on what remains a confidential project are not forthcoming, Collier is more open with regard to the challenges of restoring such vessels using technologies that span from the era of steam and riveting through to today’s cutting-edge techniques.

For him, the key is to identify the features that made a vessel significant and ensure that these are accurately restored while also acknowledging that private yachts are not museum pieces and modern owners require uncompromising accommodation and services.

The impact of the current regulatory environment is not insignificant either, but this is not apparently an area for compromise since with quality design it is possible to comply with the most onerous current requirements.

What does this mean for Nahlin? In simple terms, for a yacht that was acknowledged to be the most beautiful of the counter stern and clipper bow type when she was launched – a highly authentic and detailed exterior. As to the rest, circumspection reigns.

Another Watson design around which there has been a great deal of speculation is the replica of_ Britannia_, due to compete in the Westward Cup this summer. Extraordinarily, the firm has not had any involvement in this whatsoever.

Some drawings, such as lines and sail plans, are in the public domain and it is on these that the new yacht is based. Was more archival data available? The answer is in sheet after sheet of immaculate, detailed drawings decorated with the Prince of Wales feathers filed under design number 270 in the archive room.

As to whether there will be other replicas of large Watson-designed yachts, this is a near certainty. With Eleanora, Elena and the soon-to-be-commissioned Atlantic, the trend is very much alive and Watson is sitting on one of the largest archives of large classic sailing yachts.

Does the firm have favourites? The range of choices is large but America’s Cup challengers Thistle and_ Valkyrie III_ clearly appeal as does the schooner Rainbow, which Collier describes as ‘one of the greatest offshore racing yachts of all time’, or more modestly, the now little-remembered Bona, a smaller version of the legendary Britannia, built for the Italian royal family.