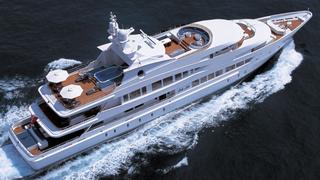 Her international crew of 15 is lead by Captain Gui Garcia; his wife Christina Jones, formerly of Tuscan Sun, is the chef.

On the main deck, the saloon showcases a custom Steinway grand piano, a service bar and a games table, while the dining saloon seats 12. The raised bridge is forward with observation seating; her main aft deck includes high/low tables for casual dining, a large sunpad and a tairway to the fitness centre. She will be equipped with brand new toys and tenders.

The sundeck is huge: the forward raised, semi-circular seating features a glass windbreak and occasional tables. Her 'Cinema in the Sky' under the arch includes a television with drop-down projector/screen and surround sound. Aft, her custom lit spa pool has a two-level waterfall and guests can relax on sunloungers with umbrellas for shade if required.