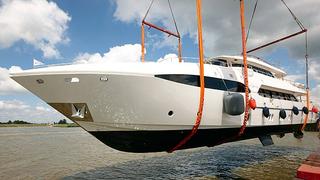 Following our news on July 27th about the launch of the 36.93m motor yacht Crystal at the Moonen yard, Richard Lambert at Oceanstyle contacts me to say she’s available for charter when delivered at the end of August.

Crystal accommodates 10 in a main deck owner’s suite, a full beam VIP, one double and two twins. Guest areas include a main deck saloon and dining area, an upper saloon on the bridge deck and a sun deck with spa pool, sun pads and a small bar. Both the bridge and main deck have alfresco dining tables on their aft decks, in addition to seating and sunloungers. The crew of five are accommodated in crew quarters in the bow, with a crew mess, captain’s cabin and two crew cabins with bunks.

The charter rates are €125,000 in high season and €100,000 low season and, while Richard says her cruising areas are yet to be determined, there could be a possibility of Crystal spending some time in Northern European waters.