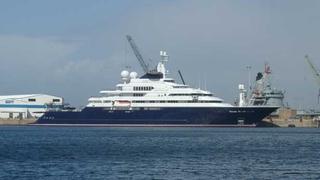 For superyachts heading to the UK for the 2012 Olympics, Portland may seem a bit far removed from the main event in London, but it has numerous advantages. For a start it will be the centre of action for the Olympic and the Paralympic sailing events, which get under way directly after the Superyacht Cup Race in Cowes. It is also a convenient stop-over destination between Falmouth, the Solent and the Isle of Wight if you are participating in - or spectating at - any of the 2012 regatta events in the area. But the clincher for larger yachts - particularly sailing yachts prevented by height restrictions from sailing up the Thames into the heart of London - is that it has multiple deep water berths and anchorages suitable for superyachts of over 24 metres in length, and air draught is just not an issue.

Portland Port, situated at the end of a peninsula off the Dorset coast, has been undergoing massive development for the Olympics, including gearing up to receive superyachts. It has over 2,000 metres of alongside berths and an 11.6 metre draught at the deepest alongside berth. And with 300 metres the maximum length of vessel (subject to the harbour master's approval) it will entertain, even Eclipse could call in. A partnership with superyacht concierge service MGMT means that anything from tailors to sommeliers could be supplied, Olympic event tickets can be sourced, and helicopter transfers to and from London and the Olympic events organised.

Amanda Milner, Portland Port’s commercial sales manager, said: ‘As some big sailing yachts are unable to cruise down the Thames, Portland would be a good location to use as a base. Yacht owners and their guests who wish to be in London for the 2012 Olympic Games will be able to leave their yachts at Portland Harbour, and take a helicopter transfer directly into the heart of London, where the stadium events will be held.’

What's more, it's a great base from which to explore the beautiful South West - the pretty, traditional seaside town of Weymouth is only 15 minutes away, and the UNESCO World Heritage Sites of Bath, Stonehenge and the Jurassic Coast are nearby. MGMT helps to plan itineraries - whether for the Olympics itself, the South Coast and hinterland or even a bit further north - and can also secure bookings for clubs, restaurants, premières, music and red carpet events.