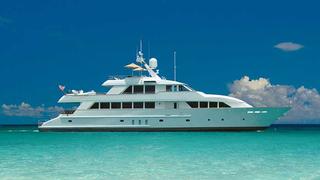 On November 8th I spoke to Jim Eden at International Yacht Collection about his latest listing, the 39m motor yacht Kimberly, and Jim now says there'll be an Open House aboard her at Fort Lauderdale's Bahia Mar D Dock between 4:30pm and 6pm this Thursday, December 16th.

Built by Palmer Johnson and delivered in 2000, this trideck superyacht has just had an extensive refit to her mechanical systems and accommodates eight guests in four staterooms. Featuring an extensive skylounge with 180-degree panoramic views, Kimberly is asking $9.595 million.