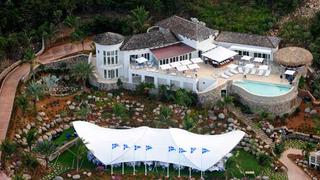 The opening of the clubhouse at the Yacht Club Costa Smeralda (YCCS), Virgin Gorda, has set the jewel in the crown of what is likely to become the Caribbean’s premiere yachting venue.

About 300 people attended the opening ceremony on Tuesday, including HRH the Aga Khan, president of the YCCS. The T-shaped dock was full to capacity and hosted superyachts including the 49.7m Zefira, named sailing yacht of the year at the 2011 World Superyacht Awards; the 56m Perini Navi ketch Asahi; 44m fast-cruising sloop Salperton; 52m ketch Mondango; 65m Benetti motor yacht Seanna; 87.78m motor yacht Musashi, the largest Feadship ever built; and 40m Westport motor yacht Resolute, which is owned by David V. Johnson, chairman of Victor International, the company that developed the site.

Guests enjoyed a ceremony followed by drinks on the clubhouse terrace and dinner on the lawn, which will host all on-shore functions related to major sailing events. The light and airy building has been constructed to make the most of spectacular views over North Sound, and has a relaxed ambience. It features a restaurant capable of hosting up to 150 people, a pool, boutique, gym, wine bar and a further amenity outside that one guest described as ‘the most beautiful bar in the Caribbean’.

The club was built by luxury real estate developer Victor International on a private peninsula in the protected waters of North Sound and is operated by the experienced yachting hands at YCCS – whose club on the Sardinian coast is regarded as one of the world’s finest for both its superyacht and leisure facilities. The YCCS Virgin Gorda has a marina with thirty-eight slips for yachts of up to 100 meters in length and nine meters in draft. It offers on-board provisioning services, crew facilities and on-site customs clearance.

The site is also linked to the new Oil Nut Bay community and Beach Club, as well as Biras Creek Resort, a Relais & Chateaux property to which YCCS yacht owners and guests will have access.