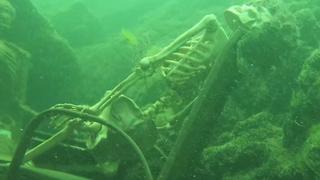 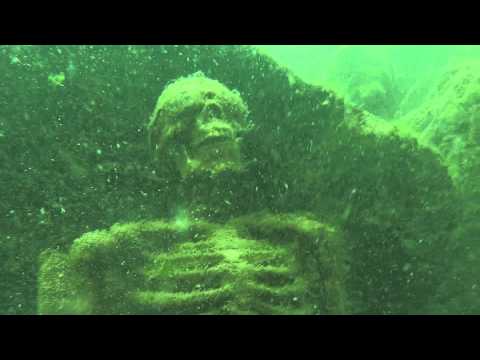 Last week a diver found a mysterious pair of skeletons having a tea party at the bottom of a riverbed and alerted the authorities. What was even stranger was that the skeletons were resting on seats and surrounded only by rocks; there was no shipwreck dive sites around that could give clues as to what the diver had stumbled across.

News of the mysterious discovery spread around the world as many tried to work out how the skeletons got there.

Seeing the news, a husband and wife have since confessed that the skeletons in the Colorado River, near the Arizona and California border, were placed there as a private joke and admitted the skeletons are fakes.

The La Paz County Sheriff and the Buckskin Fire Departments were sent to investigate the skeletons, which were found 40ft under water.

"When they went down, it was a little scary at first," Lt. Curt Bagby from the La Paz County Sheriff's Office told local press. "The fire department went down with a Go-Pro. They were advised not to touch anything — just to take video (below). When the diver came up laughing, we found out what we were dealing with."

The two skeletons both turned out to be fake and have been named Bernie and Bernadette. The couple were sat on deck chairs on the riverbed, dressed in swimwear and Bernie had a can of beer in his hand.

The husband and wife from Phoenix have now claimed responsibility for planting the models. The pair said they had left the skeletons as a joke with a fellow diver.

Lt. Curt Bagby has been taken aback by how much interest the skeletons have generated.

"It's insane," he said. "When I saw the Go-Pro footage, I knew it would go viral to some degree, but I had no idea it would get this big.

"We try not to encourage people to do this kind of thing, but it was relatively harmless. It was deep water, they were wedged between some rocks, and there was no reason to expect someone would find them."

It is hoped that the skeletons can now be left in the river for divers to discover in the future unless it is an issue with federal agencies.

"We're thinking of leaving them in the waterway - something like a geocache, where we can let divers try to find them. I can't see this being a liability or risk to lake goers," a spokesman added.