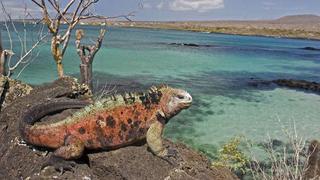 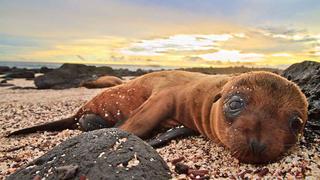 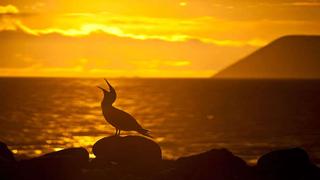 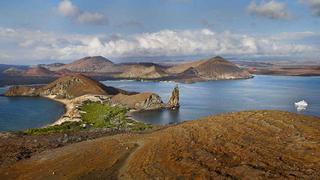 Where nature rules  charter in the Galápagos

Where nature rules  charter in the Galapagos

A dark form darts beneath my flippers while out for our morning snorkel  it dives and swerves, then heads straight for us. My heartbeat quickens; there are sharks throughout the Galapagos Islands, and while our guide has said that no shark fatalities have ever been reported here, I dont want to be the first.

But it is moving too erratically to be a shark, too quickly to be a sea turtle and too unwieldy to be the beautiful ray with the eight-foot wingspan we saw gliding over the vibrant reef moments before. As the mysterious swimmer comes into focus, I see it is a sea lion. And its not alone; five pups are cavorting before our group, inviting us to play.

Richard Polatty, our naturalist guide for our weeklong charter aboard 141-foot motor yacht Integrity, explains that these California sea lions evolved from the same lineage as dogs and are more closely related to our four-legged friends than the fur seals sharing the rugged Galapagos coastline. So it isnt a stretch to say our new playmates are as playful as puppies.

They glide up to our masks, plunge beneath us and repeat. We catch on and try to match them flip for flip. Soon we are playing a frenetic game of waterborne tag, one that the sea lions are bound to win. For lovers of nature, animals or rare experiences, it is a thrilling sport.

Moments like this are what make a visit to the Galapagos special. The fearlessness and tameness of the animals is extraordinary, whether its the sea lions and penguins who view us as entertainment, the birds who dont move a feather when we approach or the giant tortoises roaming the farmlands on Santa Cruz Island, so peaceful in their grass-gnawing existence that your presence cannot disturb them. Thankfully, these animals have not been given a reason to fear man.

Charles Darwin visited the Galapagos aboard the HMS Beagle in 1835, and his time there led to his theory of natural selection. In 1959, the Charles Darwin Foundation opened to ensure the conservation of the islands unique ecosystem. This, coupled with the Galapagos National Parks strict visitor guidelines, has helped preserve it as a place where nature rules supreme.

The Galapagos is a place deserving of the term unique  43 percent of all the animals and plants seen in the Galapagos are only found here. Its really the only place in the world where you can see the same assemblage of animals that it started out with. Everywhere else has been so highly altered, says Polatty, a geologist who has lived and worked in the islands for 30 years.

Hawaii probably has more endemic species and plants, but now their extinction rate is higher than their endemism rate. But with us, we caught it in time.

The Park mandates both private and charter yacht itineraries specifying anchorages and shore landing sites. This might seem cumbersome to yachtsmen who are accustomed to making their own way, but it helps ensure that the anchorages and shore stops are less crowded. Recently, the Park decreed that all Galapagos-based yachts like Integrity must offer two different weeklong itineraries to further disperse boats and lessen mans impact.

Integrity might not look like your typical charter yachtthe 141-footer is not ensconced in marble or sporting personal watercrafts, which are banned here  but in these remote islands, she and her 90-foot sister Reina Silvia are luxurious.

Integrity is certainly finer than any other yacht based in the islands, and once you get past the non-designer décor, Integrity is in no way lacking. Her crew, in formal dress, is courteous and doting (and they hosted the most creative equator-crossing), the chef prepares amazing meals highlighted by homemade soups and a hot tub greets you after a cold-water snorkel.

Though smack dab on the equator, the Galapagos are set at a confluence of ocean currents and enjoy an unexpectedly cool climate, with water temperatures ranging from 55º to 80ºF. These same currents delivered the islands abundant life, with flora, fauna and animals hitching a ride on currents such as the cold, north-flowing Humboldt Current.

Not only do these islands seem like nowhere else on earth, each looks strikingly different from the next. Rabidas red-sand beaches are strewn with lazy sea lions; a walk across the lava fields of Santiago island is the closest one might experience to a moon landing, while on the same island, Sullivan Bays beach is white-sand, paradise-island bliss; and Tower island to the northeast is a rocky plateau jutting up from the sea.

This island is for the birds, literally, and on our beach landing we are greeted by red-footed boobies and see great frigates swallow-tailed gulls and owls. Tower Island is a favorite of Prince Philip, and steps etched into its cliffside bear his name.

All of this is just Integritys eastern itinerary. Islands visited on the western route tower with volcanoes, the second most active in the world. Both itineraries include hiking, snorkeling and educational walks ashore; or one may choose to simply relax with a book and enjoy the spectacular scenery from inside the comfort of the salon. Farther to the north, Wolf and Darwin islands have the best scuba diving, including whale shark encounters, but only dedicated dive boats venture that far.

Natural selection and adaptation can be seen today. Flamingos, we learn, are not the shiest of animals and prefer to mate with an audience of peers; in captivity they have been tricked into mating by adding mirrors to their habitats. But the diminished Galapagos flamingo population has adapted to mate in much smaller groups to survive. Conversely, penguins are not faring so well. As the climate changes, their food source, the anchovy, lives in deeper, colder watertoo deep for the penguins to dive, and their population suffers with lack of food.

We try to limit the direct impact of man, says Polatty. Conservationists will help repopulate a species man has harmed, such as tortoises, which once numbered a few million until the first explorers caused their numbers to dwindle to 1,400. But theres no such luck for the penguins. Yet Polatty doesnt believe the islands are in decline. Yes, it is fragile, but it is visitable without damaging. People appreciate it better after they visit because they realise how fragile the place is, he says. Responsible tourism is key.

The Galapagos top most bucket lists, and for good reason. Nowhere else can you experience so much wildlife in such stunning surroundings. Its a photographers, nature-lovers, birders, scientists, adventurers and yachtsmans playground.

Its kind of a perfect combination; yes its adventurous, and one of the most remote and wild spots in the world, but when you come home you can have a guy wearing a tux serving you hors doeuvres in air-conditioned comfort, says Polatty. Thats a sea change Darwin never would have believed!