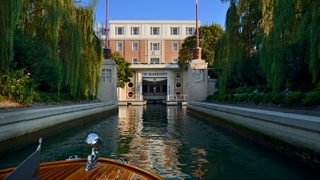 Book it now: Gather by JW culinary festival in Venice

To finish off the Mediterranean season with a bang, JW Mariott’s culinary festival will be returning to Venice this Autumn for its second edition between 26 – 29 September 2019. The immersive, gastronomic affair will see a crew of Michelin-starred chefs and wine experts descend on the private island of Isola delle Rose, home of the JW Marriot Venice Resort and Spa.

Guests who join their fellow foodies in the floating city will be treated to a host of gourmet experiences, from live cooking masterclasses to exclusive dinners and fine wine tastings. Following the success of the inaugural event in 2018, this year’s festival will see a range of mindfulness sessions and talks added to the agenda.

Speaking in anticipation of the event, Marriott’s Global Brand Leader Mitzi Gaskins commented; “Right after we concluded our JW culinary festival in Venice last year, one thing was abundantly clear to all of us: we are returning in 2019’. Gaskins added that “the focus of this year’s festival truly connects to JW Marriott’s passion for nourishing the soul “.

In the run up to the event, members of the Marriott Bonvoy loyalty program will have the opportunity to bid their points on ultra-exclusive experiences. Possible treats include preview events in London and New York, as well as celebrity chef meet and greets or a seat at the coveted ‘Il Finale: All Star Feast’ gala dinner.

As if the line-up of events were not tantalising enough, participants will also get to enjoy the resort’s extensive facilities throughout the duration of the festival. Opened in 2015, the luxury hotel is just a 15-minute boat ride from the bustling centre of St Mark’s square. It boasts unobstructed views of Venice, is home to the largest spa in the city and features its own culinary centre, the Sapori Cooking Academy.

Taking place between 26 – 29 September 2019, Gather by JW offers a ripe opportunity to experience the romance and grandeur of Venice through its traditional flavours. Tickets can be booked through the JW Marriott website.

Sail away: A regatta romance in Venice

7 7 Of The Hottest Tables in the Med

7 days from Rimini to Trieste via Venice on a superyacht