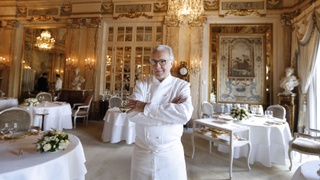 The legendary Hôtel de Paris Monte-Carlo has welcomed its fair share of glitterati in its 150-year history. Home to two of the most expensive suites in the world, it's no wonder why. Following a four-year, €230 million facelift, Sophia Wilson heads inside to discover how its rich heritage has shaped its future...

The beating heart of the grande dame

The past: The lobby of the Hôtel de Paris has welcomed royalty, socialites, politicians and many a deep-pocketed gambler for more than 150 years. French entrepreneur François Blanc took a huge gamble himself in 1864, transforming a plot covered in olive and lemon trees into the Casino de Monte-Carlo. Naturally the casino’s high rollers needed somewhere stylish to rest, so he created the Hôtel de Paris nearby to accompany it. Designed to be “a hotel that surpasses everything”, its vast, glass-domed, marble-floored, gold-leafed lobby has always set the operatic tone for what lies within. Its most famous resident is a bronze statue of Louis XIV, resplendent on horseback. The steed’s raised right foreleg has been polished to a shine by the generations who have touched its knee for luck before heading across the square to place vertiginous bets.

The present: The paparazzi lurking on the hotel’s marble steps outside may be armed with digital cameras rather than flashbulbs, but the grand lobby remains a classic show-stopper. It’s still home to gold pillars and ornate stucco, but the entire space now has a lighter feel because it offers direct access to an adjoining open-air courtyard. The new 671-square-metre interior garden is dotted with palm trees and marble columns. Naturally, this being Monaco, it is also lined with boutiques including Graff, Harry Winston, Omega and Stardust. The prize jewel of the lobby is the display of fresh flowers that sits on a circular mahogany table, with a thick golden inlaid rim. A new arrangement is created every Thursday by florist Marco Traverso, and, depending on the season, the table bursts with giant blush-pink hydrangeas or violet larkspurs. These flowers serve as the most Instagram-worthy spot in the hotel.

The past: No request has ever been too extravagant for residents of the hotel’s suites. Beams were added to one of the rooms for Empress Elizabeth “Sissi” of Russia so that she could practise the trapeze before bed, and Winston Churchill used to book out the sixth-floor suite for the summer season so that his faithful budgerigar Toby could fly freely. Disaster struck in 1961 when a window was left open, and the bird was lured outside by the fresh sea air. Despite a frantic search by an army of gardeners and a hefty reward being offered by Churchill, he was never recovered (several doppelgängers were presented but they refused to answer to “Toby”). Churchill returned twice more to the hotel before his death in 1965, and a suite was created in his honour. The only room ever booked by Frank and Barbara Sinatra, it offered some of the finest views of the harbour.

The present: The Churchill suite was given the heave-ho as part of the renovations to make way for the splendid Princess Grace Suite – one of two new penthouse suites created. Alongside its companion, the Prince Rainier III, the double-storey space commands some of the highest room rates in the world (from £28,000 a night). In keeping with updates to the rest of the hotel’s inventory, the Princess Grace has a more feminine feel than the previous design, with neutral tones and Carrara marble, yet not a floral pattern in sight. The Princess’s son, Prince Albert II, advised on its contemporary take on art-deco style, and it is packed with personal touches, including vintage family photographs, books from her personal collection and her own pressed flower displays. It makes the most of the views once cherished by Churchill, with two gigantic stone terraces. The top perch for spotters during the Monaco Yacht Show, the outside areas have been brought into the 21st century with an infinity pool that lights up in a rainbow of colours, and table football in a bespoke chrome and wood design.

A drinking hole that runs to its own rhythm

The past: For decades, the hotel’s Bar Américain has been the go-to destination for those who will only drink a Bellini if it is made with fresh white peaches. Lying to the left of the grand lobby, the space was first home to a restaurant called Café Divan, opened by François Blanc to replenish peckish gamblers. As the hotel developed it was turned into a speakeasy-style drinking venue with live music every night of the year. Sinatra became a genial regular (always sitting at table 34) but he liked to keep the staff on their toes. On one occasion he reportedly asked for the lights of the casino opposite to be turned off as they were hurting his eyes (a compromise was found by drawing a curtain). On another, when the resident pianist struck the opening chords to Strangers in the Night, he playfully retorted: “I don’t sing your songs, so don’t sing mine.”

The present: Regular patrons of this establishment are so attached to its charms that the revamp in this corner of the hotel was handled with a light touch. New interiors were created by David Collins Studio but only the most devoted customer would be able to spot the differences. Its walls, lined with burgundy and amber silk, deep-pile rugs and marble-topped tables (sturdy enough to dance on) still exude a 1920s feel, but some of the live acts are a little more 21st century. Head barman Khalid El-Hajraoui, who has been mixing the cocktails for the past two decades, recalls an impromptu show by Lady Gaga as being the most raucous party in recent years. “They played until two o’clock in the morning,” he says. “I’ve seen some crazy parties here, but that one was unique.”

The past: For the past three decades, the best bottles from the cellar have been served at the hotel’s signature restaurant, Le Louis XV – Alain Ducasse. In 1987 Prince Rainier III challenged Ducasse to create a restaurant and menu that would secure three Michelin stars within four years. Not one to be daunted by a task, Ducasse secured the status in just 33 months at the age of 33. It was the first hotel restaurant to be awarded three stars and Ducasse’s contribution to the Principality was so appreciated that he was offered Monégasque citizenship in 2008.

The present: Ducasse now uses Le Louis XV as a “nursery” for his young chefs and the reins are currently in the hands of chef de cuisine Dominique Lory. The restaurant had to set up temporary shop on the ground floor of the new Rotonde wing during the works. It’s now back in its original location, and lunchtime seats on its Casino Square terrace during the Grand Prix cost more than the average family car. The restaurant has been given a facelift that balances the room’s original intricate cornicing with modern touches, including a glittering halo of lights made from 700 pieces of handmade Murano glass. It still delights up to 50 diners a night with personally adapted tasting menus based around Riviera produce. Dishes vary from morsels of mackerel, which encapsulate the fish’s sweetness and the scent of a pebble beach, to succulently cooked wild duck. The secret to its success, according to Lory, is obsessive quality control. “At Le Louis XV, during the preparation process of any dish, it is tasted at least four times and there is not a single plate that leaves the kitchen for the dining room without Julien’s [Lasseaux, the sous-chef] or my approval,” Lory says.

A hidden labyrinth of treasures

The past: François Blanc may have been the driving force behind the hotel’s lavish appearance above ground, but it was his wife, Marie, who ensured that there was a wine cellar worthy of such a grand establishment. She is thought to have overseen the construction of this subterranean maze, which took 100 workers 18 months to dig, 10 metres into the rock that lay between the Hôtel de Paris and Hôtel Hermitage. It was modelled on the great cellars of Bordeaux, and when the cellar was first opened by Marie in 1874, the barrels came directly from the vineyards so that the wine could be bottled on site to guarantee its provenance. During the Second World War, the hotel barricaded 20,000 of the most expensive wines behind a seven-layer wall of inferior and empty bottles to hide them from the occupying forces. Churchill was on hand in 1945 to join in the celebrations when the contents – which included Château Bel Air Marquis d’Aligre 1850 and Château Gruaud Larose 1865 – were released from their wartime hideaway. Not one to shy away from a party, he celebrated with a bottle of 1811 rum – another bottle of which is still thought to be in the inventory.

The present: With an estimated 900 bottles uncorked a day across the Société des Bains de Mer de Monaco group (the group manages and owns the Monte-Carlo Casino, the Opéra de Monte-Carlo, and the Hôtel de Paris), guests certainly haven’t got any less thirsty, but there have been some minor changes for the cellar. During the 1960s, wine traceability (the method through which anybody in the wine supply chain can verify the origin and composition of each batch of wine) became possible due to estate bottling, and the cellar slowly changed to storing bottles. Its 1.5 kilometres of racks are now under the guardianship of chief sommelier Patrice Frank. His team keeps an inventory of the stock, 50 per cent of which is from Bordeaux. A weekly wine committee of buyers and waiters tastes up to a dozen wines to ensure that only the finest are served to guests.