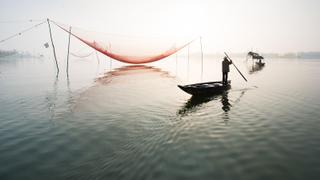 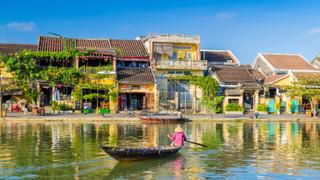 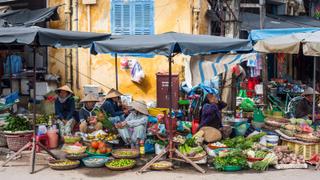 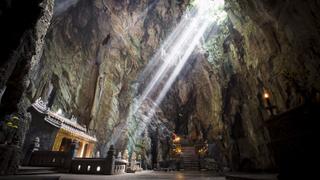 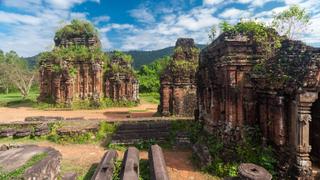 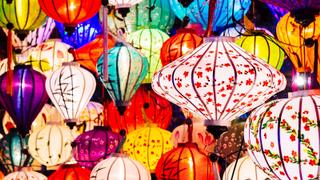 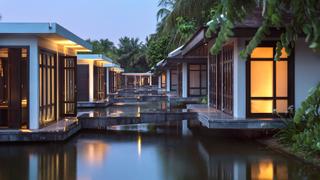 Vietnam's lantern lit coastal cities and limestone islands are calling out to be explored by superyacht. Risa Merl takes in this unfamiliar but richly rewarding destination.

I balance on the narrow bow of the fisherman’s boat, clenching in my hands a net heavy with seawater. With a bend of the knees, a spin of the hips and a flick of the wrists, the net flies into the air, unfurling a halo of mesh that quickly sinks into the water. Although it is nowhere near the perfect form that the fisherman had demonstrated only moments before – his throw spiralling wide, hands moving deftly to cast and retrieve the net in seconds – I am relieved my attempt has yielded one fish. I let it wriggle to freedom, disappearing into the quiet backwaters of Hoi An.

There is a stillness here, a lull in the energy that pervades the vibrant ancient city of Hoi An itself, which is full of intoxicating smells, bright lanterns and a mash of architectural styles. Although colourful Vietnamese fishing boats of all shapes and sizes bob against the palm forest that fringes the waterways, we don’t see a boat you’d describe as a yacht.

Vietnam has warmed to tourism, shrugging of the spectre of a decades-long war to sit atop the adventurous traveller’s must-visit list. It’s also piqued the curiosity of the intrepid yachting set, though that intrigue has not been mutual.

Vietnamese authorities have regarded private yachts as an oddity, privy to the same rules as a foreign commercial vessel. But there is a sense that change is under way. Vietnam now has its first marina and there has been an increase in specialised yacht agents who are able to help navigate the murky, ever-changing regulations and legally circumvent some of the burdensome rules.

“Pleasure boating is still an unfamiliar activity for the Vietnamese authorities and isn’t clearly described in any specific regulations,” says Sytske Kimman, Northrop & Johnson Asia’s executive director and a yacht agent for Vietnam. “Although the understanding about yachting as a tourism activity is growing, the formalities have not been adjusted yet.”

Despite this, some notable yachts have passed through. When Feadship’s 44.6 metre Helix did an Asia tour, Kimman remarks on some “fantastic parties” held in Vietnam, and 67 metre Alloy sailing yacht Vertigo (managed for charter by Y.CO) sailed here with her owner nearly five years ago.

Those who do take the time to visit are rewarded, finding a destination that is still raw but with plenty to do beyond the water’s edge. “It was very interesting, but challenging. They [the Vietnamese authorities] didn’t really know what to do with us,” recalls Vertigo’s captain, Barry de Kock. “But once you’re on shore, it’s a wonderful place. The owner and guests loved it because it’s so different to anything else. It’s not manicured and tourist-friendly like Thailand.”

Owners and guests who would like to experience these unusual cruising grounds can fly in to meet their yacht, and Hoi An’s location, along the central Vietnam coastline, makes it an ideal place to begin exploring north or south. The larger city of Da Nang, 30 minutes to the north, is the main port and airport, but the draw is picturesque Hoi An, listed as a UNESCO World Heritage Site since 1999. To wander the dusty streets is to step back through time, a blend of Vietnamese, Chinese, Japanese and French architecture, the most striking from the 15th to 19th centuries. Known as the City of Lanterns, you pass through a rainbow of light – as the delicate paper structures hover overhead, invisibly suspended, illuminating the storybook streets of this ancient city. Once a bustling port, it still breathes with a liveliness, from the clamour of the morning waterfront sh market to the late night hum of sewing machines. Hoi An’s other nickname is the City of Tailors and their skills, which have been passed through generations, mean that bespoke garments can be created in less than 24 hours.

Just beyond Hoi An to the north, the Four Seasons Resort the Nam Hai – one of the best hotels to visit in remote destinations – is a beacon of calm set along an expanse of buttery yellow beach. A succession of infinity pools leads from the entrance to the sand, framed by towering palms and low slung buildings. Each villa – ranging from one to five bedrooms – is angled to optimise ocean views. The newly opened resort speaks to Vietnam’s luxury travel ascension, and yachts are welcomed by the resort to anchor off shore and tender in to enjoy the excellent restaurants and unique spa – both reason enough to stop by.

Once ashore you can’t help but be bewitched by the resort’s spa-like serenity – and the spa itself is something to behold. The Heart of the Earth Spa is modelled on Vietnamese spiritual leader and peace activist Thich Nhat Hanh’s book Love Letter to the Earth. Keeping in step with his writing, the spa focuses on an awareness of being at one with Earth, and treatments work to align guests with nature’s rhythms. Treatments are held in private pagodas set over a peaceful lake and make use of crystal singing bowls. The bowls tune the body back to the harmonic intonation of nature, vibrating along with Earth’s own heartbeat.

As an anchorage, Nam Hai presents a perfect base for adventurers to enjoy further exploits on land – bike riding in the rice paddies at dawn, a visit to the Marble Mountains for staggering views of the coastline or to the temples of My Son, another UNESCO World Heritage Site. The temples were built between the 4th and 14th centuries but badly damaged by American bombs. It is in these moments, gazing at a beautiful, half-standing temple in a humid jungle clearing, that the memory of war feels palpable.

Wildness pervades any journey here. Vietnam’s still untamed nature makes it inviting to travellers, and to the superyacht community. “At the moment, cruising Vietnam is still in the ‘adventurous new destination’ category,” Kimman concedes, “but if a yacht is prepared to accept the bureaucratic procedures and fees, it is an exciting destination. Not many yachts have visited Vietnam, and those who have are very upbeat about their encounters.” Captain De Kock agrees: “It’s not easy cruising, but for the adventurous person, it’s well worth it.”

Escaping Phuket to discover dreamlike diving in the Similan Islands