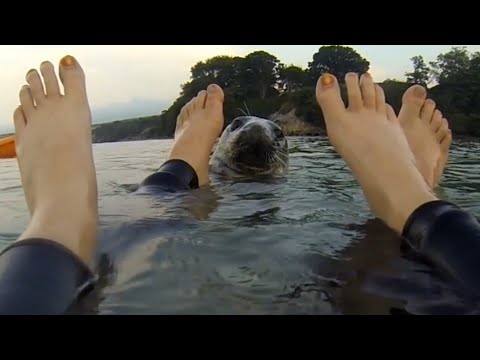 An English seal has become an Internet sensation after three kayakers captured footage of him playing footsies with them.

Lucy Godley, Luke Whiting and Callum Howlett came across the seal off the Dorset coast last week and videoed him playing with their kayak and even nuzzling their feet.

"We saw this lady in the water with what we thought was her dog," Godley told local press. "The next minute he disappeared and popped up by our kayaks.

"He was watching us for a while and we kept very still. He then decided to try and jump up on our kayaks. After a while we got into the sea one by one, he was very fascinated with us and he would pop up and nibble our feet.

“He was very friendly and happy to see what we were doing. I believe he's the only one sighted in this area so I bet he was happy to play with some friends. It was a once-in-a-lifetime experience and still can't believe it happened to us.”

The seal, who has been nicknamed Ron, has become something of a celebrity after several other playful interactions. Ron has entertained yachtsmen, fishermen, swimmers and beach-goers over the past few months.

In March, another kayaker, Andrew Linstead, filmed Ron making several attempts to try and climb on board his kayak. Unfortunately Ron’s hijacking skills still need some improvement and he fails to stay on board.

Perhaps Ron should take some lessons from Pancho, a sea lion in Cabo San Lucas who recently hopped on board a boat and gate crashed a honeymoon meal.