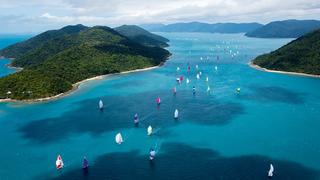 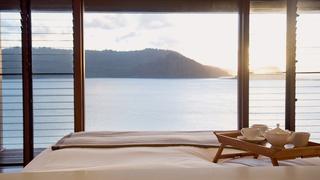 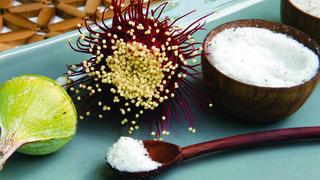 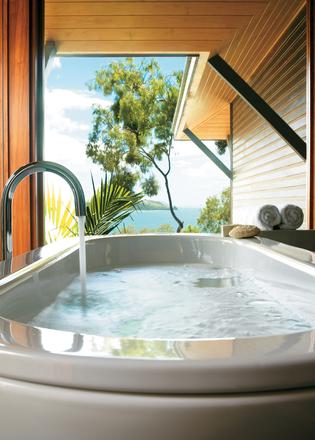 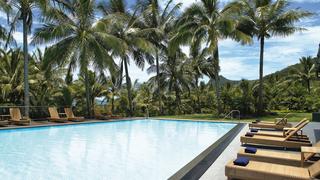 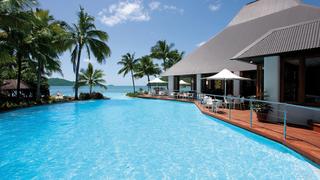 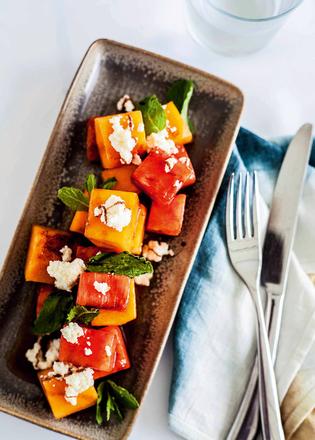 This article first appeared in the January edition of Boat International

The sun catches on the steel nose of the ketch that southern winds are propelling towards the starboard flank of Andiamo. It is a pretty sight, sails taut against the sky, bow slicing through the milky blue of the Coral Sea, but she is definitely headed, fast, for the middle bulwarks of this sleek 28 metre motor cruiser. Several pairs of knuckles whiten around railings. Most people have put down their Champagne glasses and the laughter, born of bravado, is losing its puff. The rights and wrongs of this situation are tricky. Yes, a motor yacht should give way to a sailing yacht, but if Andiamo evaded every boat on the Audi Hamilton Island Race Week course, nobody would be able to predict where she was headed. Eventually, the boat slides past Andiamo’s stern, the skipper shouting something salty.

Sandy Oatley stands on Andiamo’s aft deck, looking faintly amused. He owns the yacht he is standing on, the island that the sailor is streaking towards and the race that has caused all the commotion, which probably aids his beneficence. But it is hard for anyone to feel less than splendid in this picture-postcard spot among the paradise isles of the Whitsundays.

Hamilton Island’s sailing nuts and superyachters usually co-exist rather beautifully, so much so that it has grown into a social scene to match the aquatic wonders here. Twenty years ago, the only notable lifestyle near the Great Barrier Reef was under the water, but since then Australia’s domestic wealth has bloomed and now young socialites up from Sydney or across from New York waft between Lizard Island, where each guest gets their own private beach, Hayman Island, the 2014 opening by luxury resort brand One&Only, and, of course, Hamilton Island.

Oprah Winfrey booked the Beach House at Hamilton Island’s ultra-chic Qualia resort and Leonardo DiCaprio is said to be fond of the Marina Muffins at the quayside deli and café. Johnny Depp and his wife Amber Heard took refuge from scandal here last July when she was charged with smuggling their pet dogs into the country.

The island has also become the centre of things for the boaty crowd, seeded by the annual race week and enhanced as charter laws across New Zealand and Australia have relaxed over the past five to 10 years. The island now receives at least one or two superyachts a week – as Andiamo’s guests regain their nerve and refill their drinks, Lachlan Murdoch’s 42.6 metre Vitters sailing yacht Sarissa sheers serenely across the bay. The island’s boaty reputation is likely to grow further next year, when the Great Barrier Reef Marine Park Authority is slated to grant greater access for vessels longer than 35 metres to the reef and islands.

Sandy’s father Bob, who bought Hamilton Island in 2003, seems to have got in at the right time: rather a habit for him. He made his fortune investing in Australia’s growing taste for coffee in the 1960s and 70s, then got into Australian wine as its reputation was igniting, storming the US market with his Rosemount brand. When he sold it in 2001 for a reported AU$1.5 billion, it was time for a passion project. Bob sadly died at the age of 87 in January this year.

Hamilton Island was already a resort but not a very good one and Oatley, a lifelong sailor, had a specific vision. “We spent a lot of time in Porto Cervo growing up because my grandfather had a house there,” says Nicky Tindill, Sandy’s daughter, who is married to pro sailor Troy Tindill. “He’d seen what the Aga Khan had built in Porto Cervo and he saw Hamilton Island as his opportunity to create his slice of paradise. In Australia, there really hadn’t been anything like that. He’s a very passionate Australian so he felt if anyone was going to do it, it would be him.”

The results are spectacular. Crucially, they kept 70 per cent of the island as untouched native bushland, home to wallabies, sea eagles, goannas, ospreys, yellow-crested cockatoos and kookaburras. There are four resorts but the top choice is Qualia at the secluded northern tip. Superyachts moor out and guests tender in to stay in a private Windward Pavilion, or lounge by a pool: the one on your pavilion balcony, the one by the beach or the one in the lobby. Nature has taken centre stage in the design and you feel it. The architect wandered off into the woods with his boots and a tape measure and positioned each oceanside pavilion freehand, directed by the topography, to make sure you couldn’t see one from another. “There were also these beautiful old gums,” says Tindill, and some of them were on the ocean side of the buildings. “Most people would just cut them down to make an uninterrupted view but he said no, and made features out of them.”

Lounging on a day bed on your veranda and watching their pearly limbs bruise in the setting sun, the sea sprawling to the horizon behind them, is a wonderfully romantic experience. Massive outdoor showers off the pavilion bathrooms are a steaming hot version of washing in the wild and breakfast in the resort’s Scandi-chic Long Pavilion is not to be missed: a fresh fruit amuse-bouche and perfect coffee before fluffy pancakes, avocado toast and other delights are whipped up fresh to order.

Superyacht guests flock out on the water to explore the Whitsundays or get close to races and mingle on land at a social calendar of fashion shows, dinners and shaded poolside lunches scattered across the island, from Qualia’s chilled-out Pebble Beach to the cool, glass-fronted Bommie restaurant. Then there’s Qualia’s spa – a spectacular oasis without equal in Australia.

But there’s plenty for serious sailors, too. From January to July boats slice through the water in gloriously hot weather and by race week in August – the dry season with temperatures around 25 degrees – Hamilton Island Marina is packed with boats. During downtime, amateurs mix with the veterans of America’s Cup clashes and Sydney to Hobart tussles, sipping flat whites in the yacht club (designed by Walter Barda to resemble a swooping manta ray) or catch up at free dockside sausage sizzles. The island management even delivers complimentary ice to boats before and after sailing: Australians understand the value of cold beer.

These treats are the work of Glenn Bourke, a former Olympic sailor and the island’s CEO – although the main reason that about 200 boats a year turn up is entirely natural. “Some days we race around the islands – we have many to choose from depending on the wind direction – some days we race short courses around the cans,” he says. “On any day, though, there are not only wind shifts to contend with, but often tidal impacts, which can be used tactically. It reminds me of Cowes Week – but warmer.”

Much warmer. A splash of the Coral Sea over your head elicits a giggle rather than a gasp – and you’re far more likely to spot a humpback whale than a ferry. “You are racing on a pristine waterway, with virtually no development or traffic,” says Bourke. “Only 12 of the 74 islands have inhabitants. You could have been racing these courses when Captain Cook came through in 1770.”

Indeed, casting off from this yachty haven there’s a treasure trove of natural wonders to enjoy, from Whitehaven Beach’s powder sands to the Great Barrier Reef and a galaxy of islands so secluded and beautiful that you’ll find it hard to worry about anything except forgetting your corkscrew.