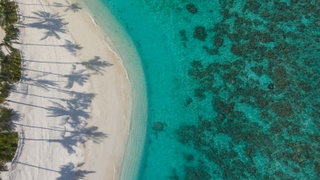 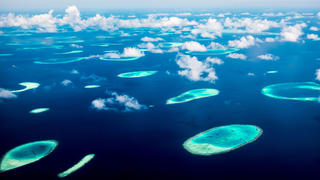 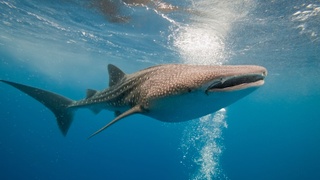 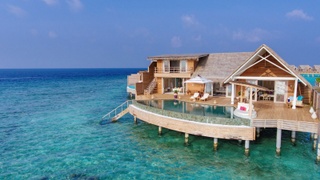 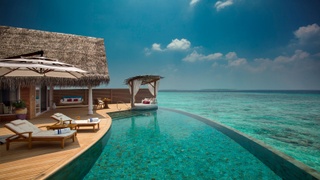 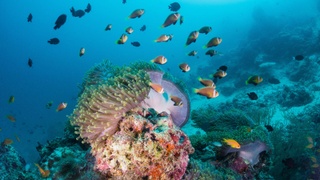 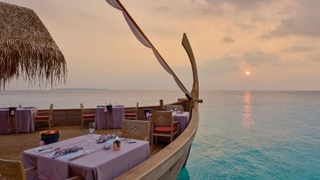 Why the Maldives is Making Waves this Winter Season

With a number of superyachts heading east for some winter sun this season, Holly Overton discovers why the draw of the Maldives is stronger than ever...

“Shark!” someone shouts from a boat. It’s not exactly what you want to hear when you’re swimming in deep water, but this is what we had been waiting for. Then, emerging from a haze of plankton, a whale shark swims into view. I am dwarfed as it glides beneath me, its tail wafting to and fro as it propels along the seabed. It's close enough to count each polka dot on its muscular body, yet totally unbothered by my presence as it continues on its merry way. What might seem like a lucky encounter is remarkably common here in the Maldives. And the protected waters of the Baa Atoll are one of the few places in the world where you can witness these gentle giants up close.

During the rainy season, between June and November, the hulhaau monsoon brings an abundance of plankton to the Atoll, creating a feeding frenzy of underwater life. While whale sharks are the largest resident in these waters, giant manta rays gather in their hundreds in a ritualistic display of underwater acrobatics as they gorge on the wealth of plankton. Their arena of choice, Hanifaru Bay, is no bigger than a football field but each year welcomes the world’s largest aggregation of mantas. It’s a spectacle for those visiting on the cusp of the winter season, but no matter what time of year the islands are teeming with life.

Hanging like a garland around the southern tip of India, the Maldives has long been the destination of choice for honeymooners drawn by crystal waters and sugar-white sand. From the air, the sea is a leopard print of blues and greens, each spot the remnants of a prehistoric underwater volcano that erupted millions of years ago to form the 1200 islands that make up the archipelago. Only 200 are inhabited, most occupied by uber-luxe hotels, while others are nothing more than a strip of pristine sand jutting out of the water.

The Maldives is also becoming an increasingly popular destination for yachts looking to break away from the Mediterranean-Caribbean milk run; its endless string of islands and deep-water anchorages offering blissful off-the-grid cruising. And while the archipelago might lack the infrastructure to accommodate larger yachts, you can drop anchor just about anywhere in the knowledge that it’s going to beautiful, and you’ll have the place to yourself. As the winter season kicks off, a number of charter yachts have already set their sights on the archipelago. Among them, the 99.5 metre Tranquility, 88 metre Maltese Falcon and 136 metre Flying Fox.

The North Malé Atoll is often the first port of call for superyacht visitors. Home to a commercial port, small-yacht marina and airport, the capital of Malé is the gateway to the entire archipelago. But for picture-perfect idylls, follow the chain north to the UNESCO-protected Baa Atoll. Superyachts head here to seek out once in a lifetime underwater experiences and make use of the world’s finest five-star islands.

Just 50 nautical miles from Malé, or a 30-minute hop by seaplane, lies Milaidhoo. Spanning just five hectares, this petite island might be small but it’s perfectly formed with a verdant centre of towering palms and twisting banyans, encircled by a baby-blue lagoon. You can loop the island on foot in five minutes, but thanks to its clever design it feels like you have the entire place to yourself.

Overwater villas are the natural choice in the Maldives, and here it’s the Ocean Residence reigns supreme. A recent addition to the island, the residence is a private paradise perched at the end of a jetty with unrivalled sea views – and there’s not a neighbour in sight. Styled like a tropical beach house, the palm-thatched villa features high ceilings, sanded wood surfaces, and woven throws mimicking the islands natural colour palette, from the turquoise of the sea to the fuchsia hibiscus flowers that bloom along the island’s sandy pathways. Sliding doors open out onto a vast wooden terrace complete with a shaded day bed and freshwater infinity pool, while a hidden loft deck is a perfect spot for an afternoon siesta. In the evenings, guests can cosy up and watch the tangerine sunset from the swinging “undohali” sofa - the best seat in the house.

And, with service to rival that of your superyacht crew, each villa is assigned an island host who is on speed dial should you need anything during your stay (particularly handy if you find yourself in need of a bowl of rice for a waterlogged GoPro).

Despite the desperate state of the world’s corals, here in the Baa Atoll, they have shown some resilience. Milaidhoo is encircled entirely by a flourishing house reef, just a stone’s throw from your villa. The reef is home to a kaleidoscope of exotic fish, from oriental sweetlips with pyjama-striped bodies and leopard print fins to shoals of black and white butterflyfish that sit on the fringes. I peer over the edge of the reef at the vertical drop below. There’s nothing in the water that can harm you in the Maldives – or so I was told – but I retreat into the safety of the shallows nonetheless. As I do, a large green turtle pokes his head up just a few feet away. Spotting marine wildlife seems almost too easy.

After a day spent snorkelling, you’ll no doubt work up an appetite. And, naturally, the seafood here is exquisite. Located on the beachfront, Shoreline Grill serves up a two-tier cake stand of stripy Maldivian lobster, mahi mahi and grilled octopus. But for true island cuisine there’s Ba’theli. Sitting on the water at the end of a winding wooden jetty, the restaurant takes the shape of three wooden ‘ba’theli’ cargo boats that once travelled through the archipelago delivering goods from far off lands. Between the boats, traders would barter coconuts and cowry shells in exchange for spices, ceramics and silks.

With a menu inspired by the spice route, chef Ahmed ‘Seabass’ Sivath whips up dishes like as coconut barbecued seabass and slow-braised lamb curry served with traditional ‘roshi’ flat bread. Just one word of warning: Maldivian chillies are incredibly powerful. I make the mistake of sampling one straight from the island’s garden patch. But then, you can always cool off your taste buds with a scoop or two of coconut ice cream.

Milaidhoo is just one example of the paradisal islands to be discovered in the Maldives. With peaceful anchorages and abundant opportunity for snorkelling, more and more yachts are being tempted east for the winter. For larger boats “the demand is growing faster than the infrastructure”, says General Manager of Milaidhoo, Shuhan Ahmed. But, he adds, “the government has plans to develop in this direction and this will for sure bring new opportunities for superyacht owners”.

For now, with 22 atolls to explore the archipelago offers exceptional island-hopping and there's plenty of scope for onward cruising too. To the west you’ll find the Seychelles, head north for more exceptional diving in the Red Sea, or continue east to the exotic cruising grounds of Southeast Asia. For those who can be tempted away from the Caribbean, leave the crossing to your captain and crew and instead meet your yacht in Malé. Qatar Airways offers one-stop flights from New York or London where you can sit back with a glass of Champagne in a QSuite business class seat and enjoy on-demand dining. With so many treats on offer both above and below the sea, it’s no surprise the Maldives is set for a bumper season.

Milaidhoo can be easily reached via a 30-minute seaplane from the international airport in Male or a 15-minute domestic flight to Dharavandhoo domestic airport in Baa Atoll, followed by a 15-minute speedboat to Milaidhoo Island. Rates start from $1,625 per night in a Water Pool Villa on a half board basis, based on two sharing.