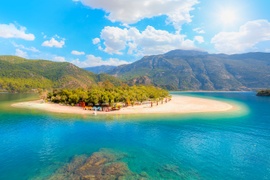 Turkey’s Turquoise Coast, or Riviera, curves around the southwestern corner of the country from the Aegean to the western Mediterranean. It has become a very popular destination for sailors, yacht owners and yacht charterers due to the great weather, facilities and endless beautiful coastline.

With summer temperatures peaking at over 40°C, July and August are very hot. But the charter season here is long, from April until June and from September to October the weather is pleasantly warm, and the beaches even quieter than usual.

A series of good marinas dot the coast, along with historical port towns and secluded coves; hence there is a huge choice of anchorages/berths so you can explore the coast at your leisure.

The clear cyan seas are warm enough for swimming, diving and snorkelling from May to November (above 20°C, peaking at 26°C and only drops to 16°C in February/March, so a heavier wetsuit is all that is needed). And the coastline also benefits from the spectacular backdrop of inland mountains, which soar high into the clear sky and are often snow-capped.

The entire coast is extremely rich in history; close to the shore there are some wonderful Roman, Lycian, Greek, Ottoman and Mediaeval ruins, castles and tombs. In fact, such treasures are so commonplace here, you’ll often come across a tombs dating back thousands of years apparently sitting in the middle of the street quite ignored by the locals…

Being outside the Euro zone, Turkey is also attractive due to the relatively lower prices for food and drink, although wine is expensive here. As most of the ports are geared up for tourism, especially visitors arriving by yacht, there is an abundance of bars and restaurants selling seafood, Turkish and Italian food.

Although charter flights do bring in tourists from all over Europe, they tend to congregate around the larger towns and resorts so it is still easy to find coves and beaches with just a handful of visitors.