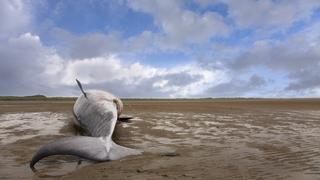 Two dead minke whales have been washed ashore in separate parts of the United Kingdom after suspected collisions with boats.

A 10.6 metre whale, which was “accidently hit by a ship”, was spotted in the Thames Estuary before washing up on a beach in Essex.

A spokesperson for the Thames Coastguard told local press that the whale could have come from across the Channel or from the North Sea.

“It’s certainly not a regular occurrence,” he said, “The whale came ashore after being killed by a vessel. The Natural History Museum took samples and declared it didn’t pose a threat to the environment.”

Another minke whale is thought to have been killed by a boat propeller before being washed up on a beach in Scotland on Monday (January 3).

The whale, which was more than 3 metres long, was first spotted floating by a local lifeboat who confirmed that “part of its tail was missing” before it washed up on Easter Ross beach.

An Invergordon lifeboat spokesman told local press: “It looks like it has been struck by some sort of boat, possibly in the Cromarty Firth or outwith. These types of whales are quite inquisitive and those on boats won’t know if they have hit one.

“Obviously Monday night’s weather conditions, with it being the tail end of the storm, have resulted in high tides and the force must have brought it ashore after we saw it.”

An environmental health officer was sent out to the carcass, which is expected to be removed from the beach today.

A Whale and Dolphin Conservation spokesman said it was “very sad” to hear about the situation.

“These amazing creatures face many threats on a daily basis, including collisions with vessels, pollution, and entanglement in fishing gear, which is why we campaign to create protected areas at sea where they might be placed in less danger,” a spokesman added.

A dead orca whale was also discovered on the Scottish island of Tiree on Sunday (January 3). Named Lulu by specialists she was part of a small group of the only known resident killer whales in Scotland and Ireland.

The cause of Lulu’s death is still unknown but sea animals being killed because of human activities, such as fishing, is considered to be one of the biggest threats to the world’s oceans.

Footage emerged earlier this week of a whale being freed by snorkelers after becoming trapped in fishing gear. Just on example of many sea amazing sea-animal rescues.