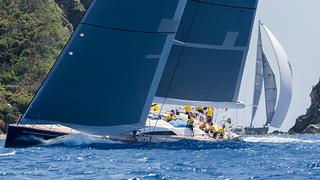 New rating rule the winner on Day One of superyacht regatta

If the new ORCsy superyacht rating system was intended to produce close finishes, it delivered in spades on Day One of the Loro Piana Caribbean Superyacht Regatta in the BVIs. Following a true pursuit format for the first time, where the first yacht over the line is the winner, just 70 seconds separated the first three yachts in Class A, with Class B first and second separate by just 31 seconds. It made for an extraordinary end to an exciting race – and it has set the scene for the rest of the regatta.

Day One dawned with bright blue skies and a steady 13 to 16 knots of breeze from the east. The race committee chose the send the fleet of superyachts clockwise round Virgin Gorda, with the performance orientated Class A yachts covering 32 miles and the Class B yachts running 26 miles.

With the 24 metre yacht Drumfire setting off first in the staggered start format, the action was hot on the first beat past Necker Island to the eastern corner of Virgin Gorda, with some boats choosing to head inshore and others – particularly the larger yachts such as the 58.6 metre Seahawk – heading offshore. As the fleet neared the corner to hoist kites and head downwind, it was the Swan Freya that had pulled out an early lead, hotly pursued by the Southern Wind Cape Arrow – with Pier-Luigi Loro Piana at the helm – P2 and the 45.9 metre Vitters sloop Ganesha.

At the bottom of the run, as the Class A fleet dropped spinnakers to round Ginger Island, both P2 and the 33 metre Inoui had closed in on Freya and Cape Arrow, setting the scene for an epic battle up past the Dog Islands to the finish. At the same time, the Class B yachts were rounding inside Ginger and were also starting to catch the Class A fleet. The ketch Marie and new Royal Huisman yacht Wisp were on a charge, and soon fleet compression would bring all the yachts together.

At the finish, Inoui had fought her way to the front of the fleet, crossing the line almost side by side with Freya, the pair separated by just 37 seconds. P2 crossed third, while Ganesha and Cape Arrow – who were fourth and fifth – were split by just a single second. Meanwhile, Marie and Wisp had been trading the Class B lead all the way up the beat, but in the end Marie just pipped it, finishing first with Wisp on her transom just 31 seconds behind. It was a spectacular end to a spectacular day – the real winner being the ORCsy rating rule.

‘In the end it was incredibly exciting, and we managed to pass two yachts right at the end,’ enthused Chris Main, tactician on Inoui. ‘We were looking ahead and halfway through the race we thought we were never going to catch them. But then the bigger boats came through the fleet and were playing cat and mouse with the smaller yachts, and we were able to get past. We went from third to first in the last 500 metres. We’re stoked to have won the first race under the new rating system!’

‘The race committee did a great job of implementing the new rule,’ said Donald MacPherson, owner of the yacht Freya. ‘The race did all come down to the end. As for our finish, there’s always a way to do something better, but second is not so bad!’

‘It was a perfect day of yachting,’ smiled Peter Wilson of MCM, who was racing on Marie. ‘We had a great battle with Wisp and exchanged places two or three times. It’s still early days but I have to take my hat off to the rating guys – today was the perfect day to test a new system.’

Tonight, the owners and their guests will enjoy the Loro Piana Owners’ Dinner on the YCCS Virgin Gorda terrace, with special entertainment provided by the great lyric soprano Maria Luigia Borsi.