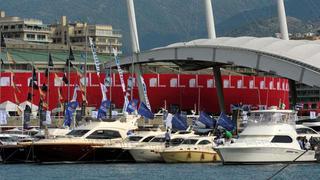 The 54th Genoa Boat Show begins on Wednesday, with organisers promising more than 1,000 boats for visitors to the six-day event.

It’s claimed there will be 100 new products unveiled to the Genoa boat show audience for the first time, including the biggest boat at the event, the Sanlorenzo SL118. On the sailing side, the biggest yacht at the show will be the sleek Vismara V80 Easy Cruising at 24 metres LOA.

Sanlorenzo will be further stealing the limelight with its SL112, while the Ferretti Group will be unveiling its Pershing 70 and the Ferretti Custom Line Navetta 28 for the first time in Italy. The stunning Monte Carlo Yachts 86 will also be on show at Genoa for the first time, alongside the Absolute 58 and Cranchi Eco Trawler 43.

After a few shaky years, organisers of the Ligurian event say things are looking up, with exhibitor numbers growing on last year partly thanks to a new show layout with better services and infrastructure.

'From the outset, we had set ourselves two major goals,' says Massimo Perotti, president of the Italian marine industry association. 'Firstly, we set out to focus on Italian excellence and production. Italian boats are a positive proof of our excellence in the shipbuilding world and in areas such as design and furnishings. 'Secondly, we worked hard to internationalise the event: the show needs to promote our values abroad, and attract buyers and journalists from all continents. I am very pleased with the way the organisers have worked, enabling us to fully achieve both objectives.'