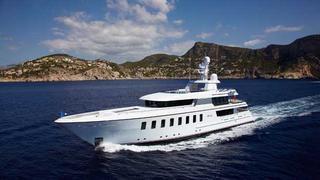 Anticipation high as superyachts head for the Hainan Rendez-Vous

Anticipation is building among the superyacht community for the third Hainan Rendez-Vous, to be held next week between 5 and 8 April. As China’s largest in-water yacht show, business jet show and luxury property and lifestyle showcase rolled into one, the event attracts the country's high net worth individuals to the Riviera-like shores of Hainan island.

The Yacht and Marine Show is based at the picturesque Visun Marina in Sanya, where more than 50 prestige vessels are displayed on the water, including superyachts, multihulls and monohulls. Superyachts expected at the 2012 event include Helix, Feadship’s 44.65m motor yacht, Northern Sun, a 50m conversion of a marine research vessel Lohengrin, the 49m Trinity, and Sanlorenzo’s 38.5m Onyx.

Among those taking part will be SYBAss (Superyacht Builders Association) which is making its debut at the show. Camper & Nicholsons will also be there for the first time, hosting a stand located at No. H19, on the walkway in front of Visun Royal Yacht Club. And Yachting Partners International will be celebrating having opened three offices in China in a year with a stand at No. J4, near the VIP hospitality tent.

Comments Bertrand Vogele, CEO of YPI, 'Shows like Hainan give us a wonderful opportunity to meet new clients and network with some old ones too.'

Fraser Yachts will also be there in force and Marketing Director Patrick Coote says: 'Over the last few years we’ve worked with a number of Chinese clients and have gradually built up strong connections in the region. However China remains something of an enigma for most of the superyacht industry. Hainan is the only “superyacht event” in the China calendar so all the big companies are heading there and all with high hopes. But does China represent massive future potential? I often think back to the two shoe salesmen who went to Africa, one reporting back to the boss that Africa was not a good target market since nobody wore shoes and the other reporting back that the African market represented huge potential since nobody had any shoes. Which view is correct in relation to superyachts in China? Time will tell…'

Says Toby Maclaurin at Ocean Independence: 'The Hainan Rendez-Vous is a critical stop on the Asian promotional tour of Onyx. Central agent Axel Douqué accompanied by Michael White are in Hainan for the event and together with a translator they look forward to welcoming visitors on board. Three special evening events will also take place with selected partners, giving Onyx an opportunity to excel and shine both day and night.'

Kingship and Vripack will be displaying the newly launched 42m motor yacht Star and Vripack's Marnix Hoekstra says, ' Star is our fifth collaboration with the Kingship yard from China and the best so far. In terms of quality Star is a true Vripack superyacht, built solely to our design, naval architecture and engineering and with Dutch supervision and craftsmen to work together with the skilled yard team.'

'This, in fact, is the first yacht from us out of Asia which can be visited by the public and thus we anticipate much traffic on board. With the Hainan show in its third year, surely this is proof that the Chinese market is truly ready for the most luxurious products.'