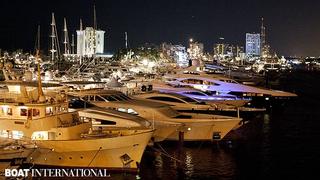 Despite Hurricane Sandy flexing its muscles on the first two days of the recent Fort Lauderdale Show, a poll of leading exhibitors brings a generally positive response. Not all exhibitors were 100 percent happy, particularly a few of the builders, but considering the weather most were just pleased to have made it through intact.

Fabio Ermetto at Heesen Yachts says, 'Once the sun came back, visitors did so too and we had several interesting conversations about our new models: the revolutionary 65m FDHF for delivery in June 2013, the new 50m FDHF in steel, the 45m sportster and the 42m equipped with Hull Vane, the underwater foil by Van Oossanen Naval Architects.

'North America has the highest number of UHNW individuals in the world and we are delighted to have had the opportunity to talk to such an important audience. Yachting belongs to Americans’ DNA and at Heesen we consider the interaction with such an experienced public motivating and inspiring.

'We hope that after the presidential elections, the market will pick up again and bring new orders from this part of the world.'

Says Jonathan Beckett at Burgess: 'FLIBS 2012 again proved to be "challenging". The impending American election, the economic climate and the weather all played their part.

'The weather in Fort Lauderdale during the first two days of the Show was horrendous and many clients cancelled and, in one case, a client arrived but turned around and went straight back home. And then the weather in the North East during the last two days of the Show prevented clients leaving their homes to come to the Show. Foot traffic was definitely considerably lighter than usual.

'Having said all of this, Burgess had a good number of interesting yachts in the Show and we are negotiating two sales directly from client visits at the Show. So, for Burgess, FLIBS was a success.'

Kevin Merrigan at Northrop & Johnson comments, 'We had 27 of the best buying opportunities in the market on display. Delta, Feadship, Trinity, Westport, Burger, all of the top pedigrees and values were at our display. We sold a Burger the first day of the show, which is always an encouraging start! We are negotiating several offers and the sellers are prepared to be very realistic. I have never seen such tremendous buying opportunities.

'After the storm, as people’s thoughts return to family gatherings, creating memories, and enjoying the wonderful world of boating, we will be ready.'

And now for Bob Saxon, President of International Yacht Collection: 'The bumpy weather start only led to a weekend of buoyancy. I had anticipated a good show as the certainty of the US Presidential election neared and my instincts were spot on. IYC enjoyed a brisk Fort Lauderdale Show with elevated activity that eclipsed any one of the past five years of FLIBS.

'Charter interest was high and as we all know, that is the entry portal for those who eventually build or buy brokerage yachts. We closed at least two deals during the show which is quite unusual in itself – walk-ups! In short, it was a good show and the proof in the pudding will be if we can close a few of the deals we are working on post-show. We intend to seize this momentum shift and pour our energies into the Miami Boat Show in February.'

Finally, Hein Velema, CEO at Fraser Yachts says, 'Although the weather didn't really help, we had a very optimistic boat show. A good number of visitors that are considering offers but no concrete results yet. We often heard that buyers want to wait to see what the elections will bring. FLIBS 2012 shows a growing confidence but not a change in sales figures.'